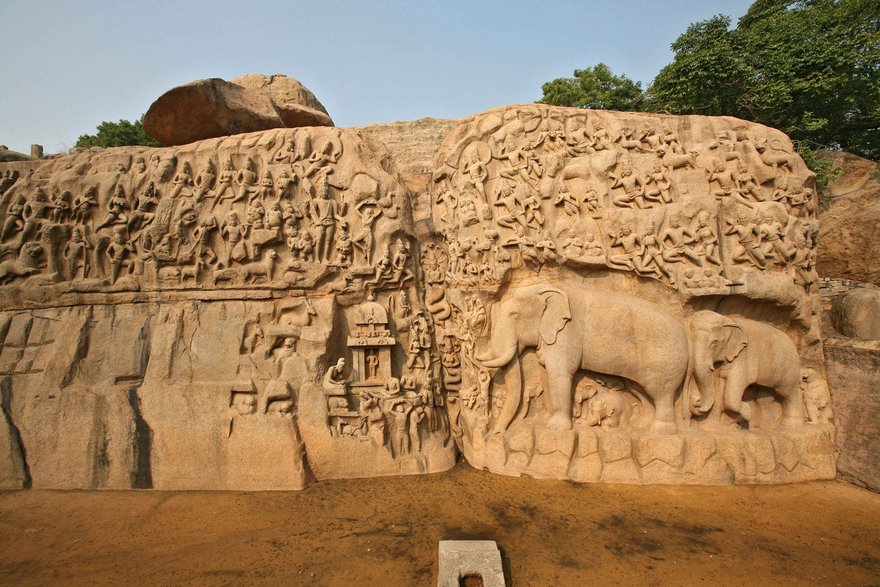 Arjuna’s Penance is a massive open-air bas-relief monolith, which dates back to the 7th century. It is situated in the town of Mahabalipuram, at a distance of 58 km from Chennai, the capital city of Tamil Nadu.

Standing tall at a height of 43 feet, the Mamallapuram monolith was carved on the face of two huge adjoining boulders, somewhere around the mid-7th century. The length of Arjuna’s Penance is around 96 feet and the monolith is also known by the name of ‘The Descent of Ganga’.

Arjuna’s Penance is known by two names as experts disagree on the stories depicted by it. As per one view, the massive rock sculpture has been named after one of the heroes of the great Indian Epic, Mahabharata. It is believed to illustrate an instance from Mahabharata when Arjuna, one of the Pandavas, performed rigorous austerities to get Shiva’s weapon and destroy his enemies. The second view is that Arjuna’s Penance is a depiction of the incident when King Bhagiratha of India did penance to bring the River Ganges down, from heaven to earth, so as to purify the souls of his ancestors. 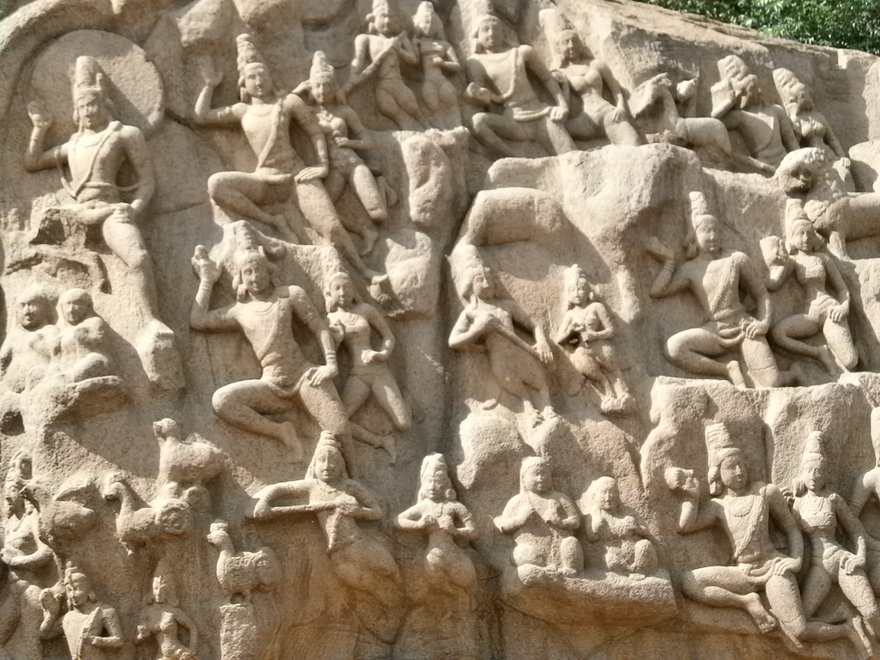 Lord Shiva answered his prayers and sent the Ganges down to earth. However, the lord decided to break her fall to earth so as to lessen the impact, by allowing the water to trickle through His hair. It is said that the animals of the whole world became curious of the incident and gathered around the soaking God to witness it. The carvings done on the massive monolith support both the stories. Apart from these incidents, the carvings also depict popular fables from the Hindu Panchatantra books.

The liveliness and naturalism of the sculpted figures stand as proofs of the outstanding skill of their sculptors. Arjuna’s Penance showcases more than 100 figures of gods and flying celestial creatures, birds and animals, including giant elephants, along with human beings and saints. A natural cleft between the two rocks separates the monolith into two separate halves. It is this cleft that is believed to represent the descent of the Ganges to earth.

The figures of animals and celestial beings carved on Arjuna Penance are shown either facing this cleft or approaching it and generally have their hands folded in adoration. Filling the cleft is a slab, which has been sculpted with male and female nagas (snakes). The hands of the nagas are held together in adoration and an artificial waterfall, fed from a collecting chamber sited above, is located just over it. There is a four-armed deity, probably Lord Shiva, to the left side of the cleft.

The deity is shown holding a weapon in His right hand and His left hand is in the gesture of granting a blessing. Dwarf ganas (guards and followers of Lord Shiva) have also been shown along with the deity. To the right of the deity and a little below, one can see Arjuna, or Bhagiratha, standing on one leg, in a yoga posture with arms upraised, seeking the blessing of the lord. Underneath this figure, one can see a carved shrine of Lord Vishnu, which has sages, a buck and his doe and a lion seated in the front, along with a few disciples engaged in austerities. 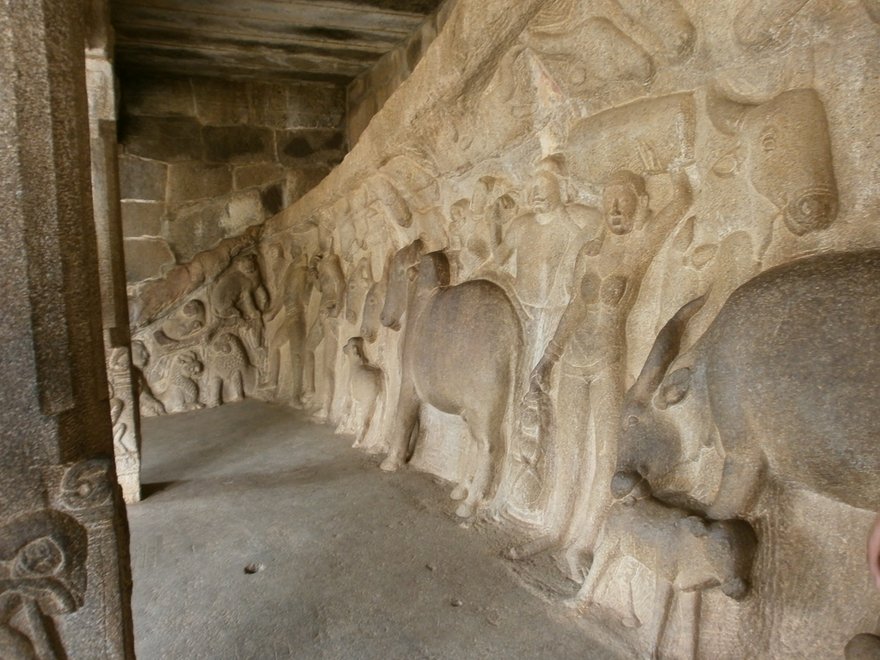 To the left of the shrine are some caves, in which a few animals are shown resting. Apart from these carvings, the lower left portion of the boulder is left largely uncarved. The Upper left portion of the boulder has carvings that depict a mountain, probably Lord Shiva’s abode in the Himalayas, where the figures of gods and animals have been blended together. On the right-hand side of the cleft i.e., on the other boulder, numerous celestial beings and animals have been carved. 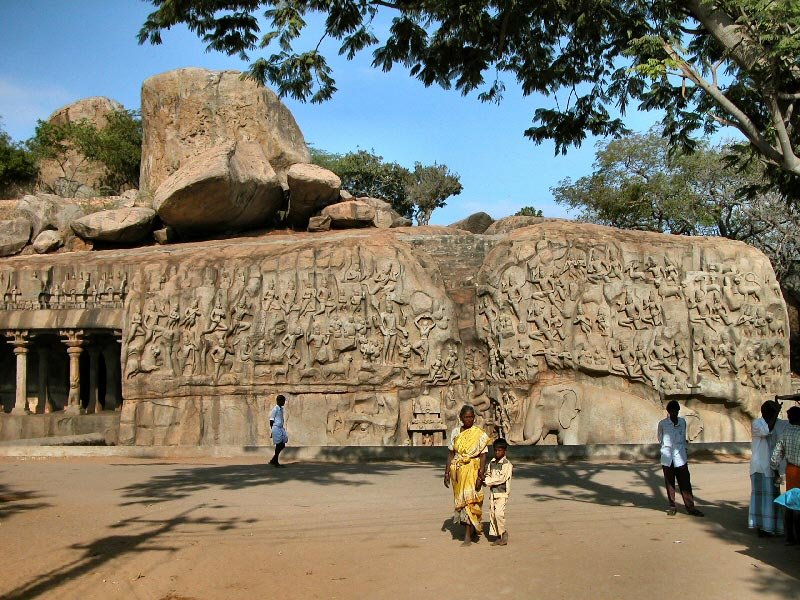 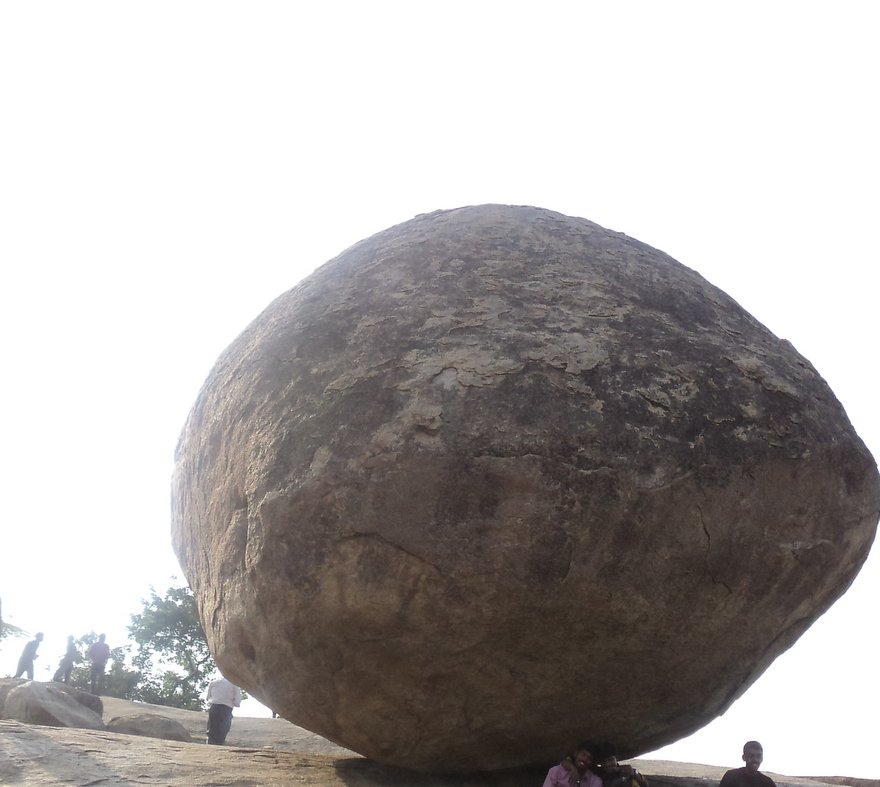 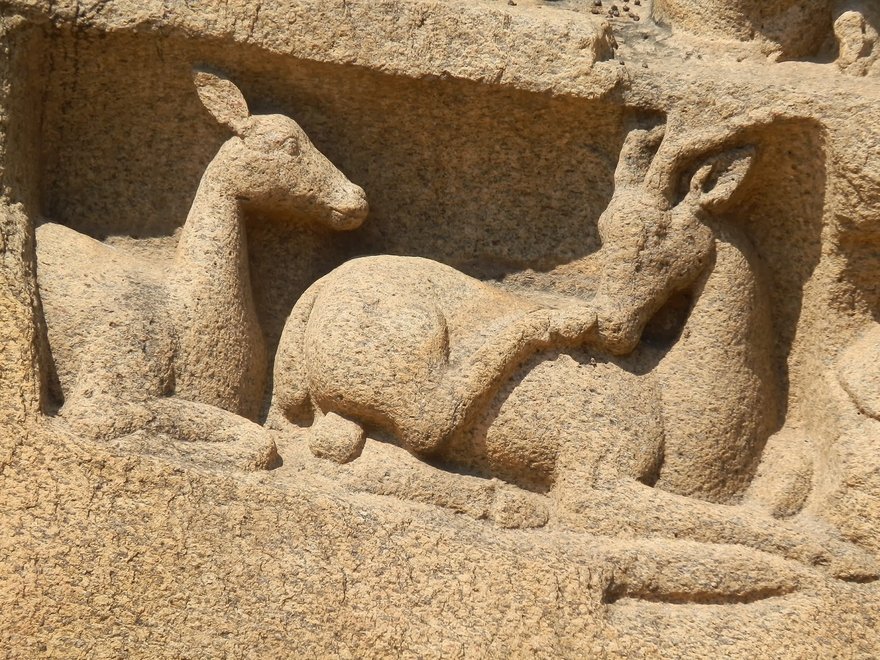 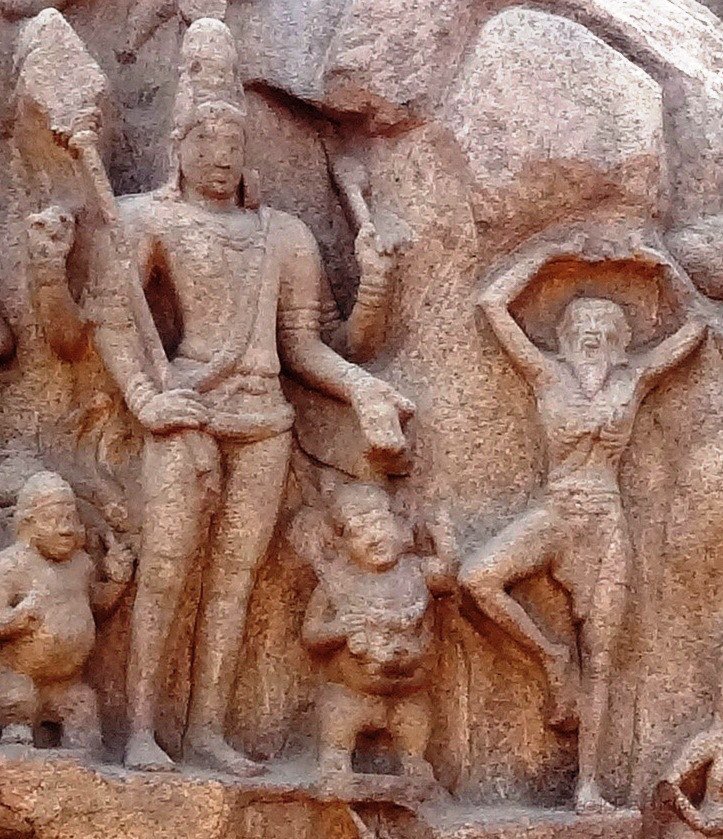 Of these carvings, the most impressive ones are those that show life-sized elephants protecting their young ones. Just below the elephants are illustrated scenes from the Panchatantra fables, like the story of the cat trying to trick the rats by enacting the posture of penance. Just to the right of these carvings, one can see a low platform, where a group of monkeys have been carved and are seen preening one another and at the same time, playing with and nursing a baby.

The group of monuments at Mahabalipuram has been classified as a UNESCO World Heritage Site.

Mystery of the Bhagavad Gita Simplified