Very little is known about Bidyapati. Native tradition represents him as the son of one Bhabananda Rai, a Brahman of Barnator in Jessore. His real name was Basanta Rai, and he is mentioned by this name in one of the poems of the Pada-kalpataru (no. 1317). The date of his birth is said to be A.D. 1433, and of his death 1481. These dates are probably correct, as his language exhibits a stage of development corresponding to the beginning and middle of the fifteenth century.

He mentions as his patrons Rai Sib Singh, Rupnarayana, and Lachhima Debi, wife of Sib Singh; and in one passage he prays for the “five lords of Gaur” (chiranjîva rahu pancha Gaureswara kabi Bidyapati bhane). From these indications I should place the poet at Nadîya (Nabadwîpa), afterwards the birth-place of Chaitanya, Rai Sib Singh and the other “lords of Gaur” being wealthy landowners of that district, and we may accept his language as a type of the vernacular of Upper Bengal (Gaur) at that period.

A considerable number of this master’s songs, under his nom de plume of Bidyapati (lord of learning), are contained in the Pada-kalpataru; and his popularity is probably due to his being only just departed and still in great repute when Sri Chaitanya was born. The reformer is said to have been fond of reciting his poems, as well as those of the Birbhum poets, Jayadeva and Chandi das, the former of whom wrote in Sanskrit and the latter in Bengali. The contemporaries of Chaitanya were the first to introduce the chaster poems, which treat of Krishna’s early life in Braj (goshtha) and Jasoda’s maternal cares (batsalya). Here is verse five from one of Bidyapati’s glorifications of Sri Sri Radha-Krsna:

The lord of the seasons has come, King Spring; the bees hasten towards the Madhavi: the rays of the sun have reached their youthful prime: the kesara flower has set up its golden sceptre, a king’s throne is the fresh couch of its leaves; the kanchan flower holds the umbrella over his head, its fragrant garland is a crown to him; in front (of him) the koil sings its sweetest note. The tribe of peacocks dances (like) a swarm of bees, (like) another crowd of Brahmans reciting invocations and spells. The pollen of flowers floats like a canopy, toying with the southern breeze. Jasmine and bel have planted their standard, with patala, tula, and asoka as generals, kinsuka and clove-vine tendrils along with them: seeing (them) the winter-season flies from before (them). The tribe of honey-bees have arrayed their ranks, they have routed entirely the whole of the winter; the water-lily has raised itself up and found life, with its own new leaves it makes itself a seat. A fresh spring shines in Brindaban; Bidyapati describes the essence of seasons.

In the opening verses of the poem, Bidyapati describes the way in which Radha’s confidante instructs her on how to behave at her first interview with Krishna, the speech of Krishna’s messenger to Radha, and how her confidante describes her mistress’s condition to Krishna:

To-day I will give thee instruction:

First indeed thou shalt sit on the edge of the couch;

When thy lover would look (at thee), thou shalt turn away (thy) neck;

When he touches (thee) with both hands, thou shalt put aside (his) hand;

Thou shalt be silent even when he speaks a word;

When I shall deliver thee (to him) hand to hand,

Youth is the greatest delight in life.

Youth is then, when with (one’s) lover.

Having (once) known the good man’s love, when wilt thou leave it?

Day by day, like the digits of the moon, it grows.

Sportive as thou art, just so amorous is Kanh:

If thou sayest, influenced by desire,

Stolen love has a myriad merits,
(Yet bethink thee) such a lover there is not in the world:

All the denizens of Braj are enamored of him.

This is the great business of a beautiful and youthful woman. [II]

Sporting, (or) not sporting, on seeing folk (she feels) shame;

Seeing, (or) not seeing, (she remains) among her companions.

Hear, hear, Madhab, the cry for help to thee!

In ill guise have I seen Rai to-day;

The charming brilliance of her face, her tinted lip

Were as though) the bandhuli flowered beside the lotus.

(Which) drunk with honey flies not away.

The slight curve of her eyebrows (is) as though

Love had adorned his bow with lamp-black.

The budding limbs are not being embraced. [III]

On (her) fair face the vermilion spot, black (her) weight of hair,

As though the sun and moon rose together driving away the darkness.

With what labour how many charms fate has given to thee!

Thy budding breast thou coverest with thy robe, showing it a very little;

With how much soever labour thou hidest it, the snowy mountain cannot be hid.

Like a lotus shaken by the wind, tilted by the weight of the bees.

Quoth Bidyapati–Listen, maiden, know that such as is all this,

Rai Sib Singh and Rupnarayan, (such is) Lachhima Debi in truth.

As we read in previous segments, including Sarga 2 of Ritu Samharam, the Vaisnava poets frequently utilized both wildlife and the activities of the common people in society as a means of describing the beauty and uniqueness of each season of the year. Sri Kavi Kalidasa described the elephant’s behaviours in winter, spring, and the monsoon rut, and similarly Bidyapati explains the glories of Spring which play upon the lila pastimes of Radha and Krsna by comparing their effects on the noble elephant:

‘O lotus-like lady; hear a friendly word! Thou shalt practise love now, having known a good man. A good man’s love is equal to gold, (like) gold in burning it has double value. In breaking, it breaks not (this) wonderful love: it increases like the fibres of the lotus-stalk. All elephants are not of equal breed: not in every throat is the koil’s voice: not at all times is the spring season: not all men and women are excellent: quoth Bidyapati–Listen, good lady, now having pondered, understand the ways of love. [VI] 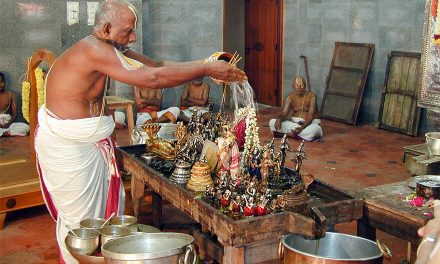