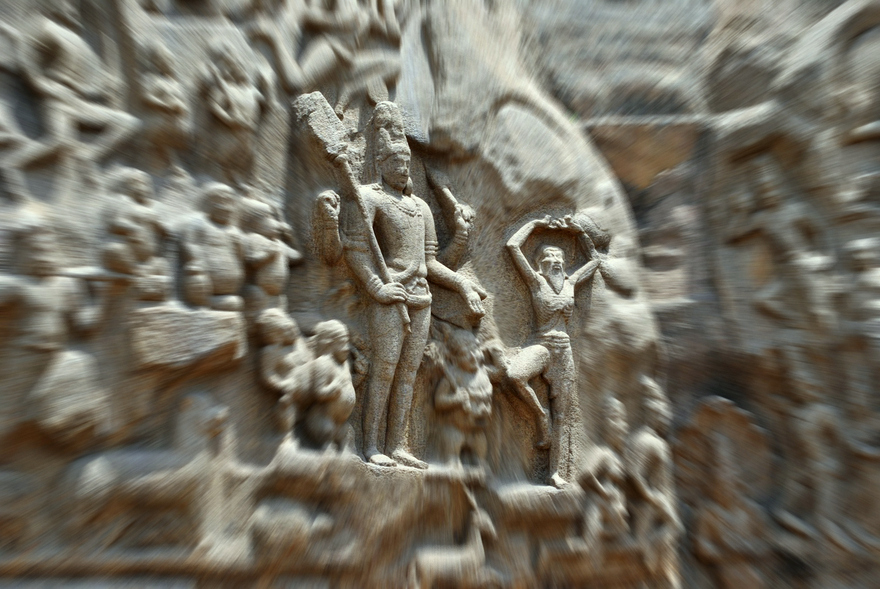 The story of Pasupataastra is from the best story of all times, the Mahabharata, and presents two of the most excellent individuals in the pantheon of India’s puranas, Shiva and Arjuna.

These epics have been retold by countless ancient authors within the great epics themselves, and also as separate stories that present amazing situations in an epic-poem or ballad or within a collection of other stories.

In brief, Arjuna, the third of the Pandavas, was the hero of the Mahabharata, the chosen one of Krishna and the recipient of the Bhagavad Gita. He was the wielder of the mighty bow, the Gandiva, and the one who had the secret of wielding the Pasupatastra, given to him by none other than Shiva himself. 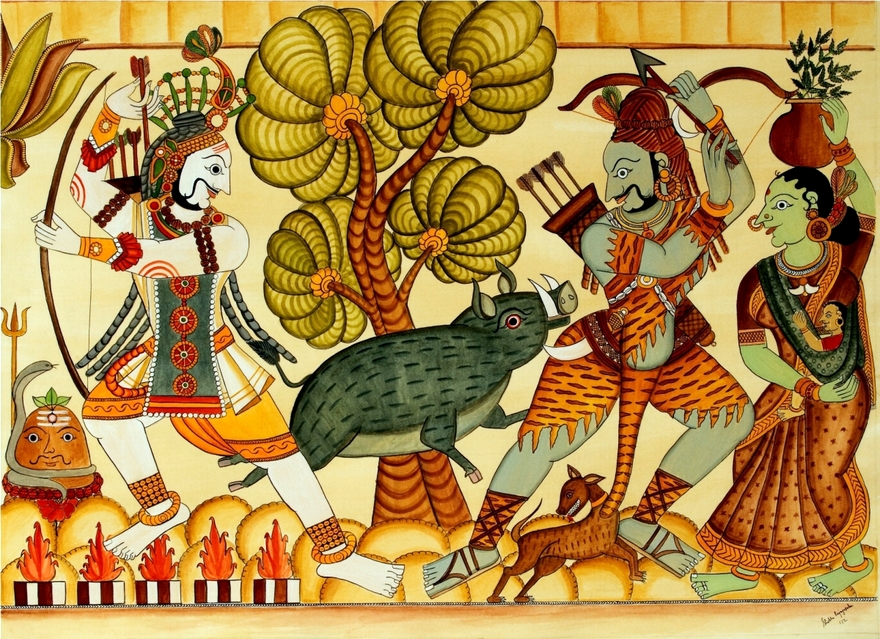 Arjuna was the thought-conceived son of celestial Indra, and Kunti, the elder wife of Pandu. He was younger to Yudhistra and Bhima, and elder to Nakula and Sahadeva. He was the rare and amazing archer who could expertly wield the bow with both the hands, and was thus, known as Savyasachi. 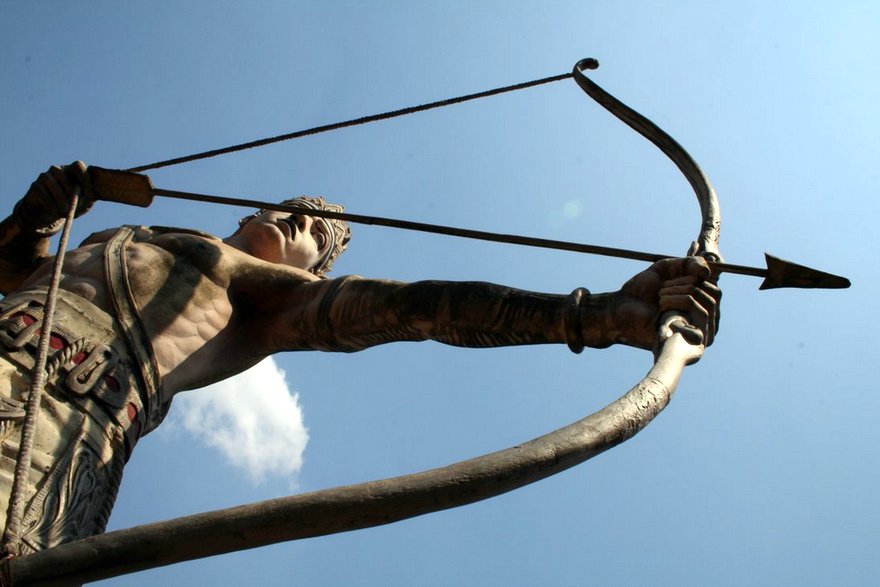 It is in the fifth year of the pandava’s exile, one day the great Maharishi Veda Vyasa visited and informed the Pandavas that many generals had agreed to take up Duryodhana’s cause, such as Karna, Shakuni, Bhurishravas, Sala, Drona and even grandfather Bhishma. He told Arjuna that if he were to fight in a future war, he would have to obtain the divine astras of Lord Indra and Lord Shiva. After the departure of Vyasa, Yudhisthira ordered Arjuna to go to the Himalayan mountains to perform austerities to please Lord Shiva. 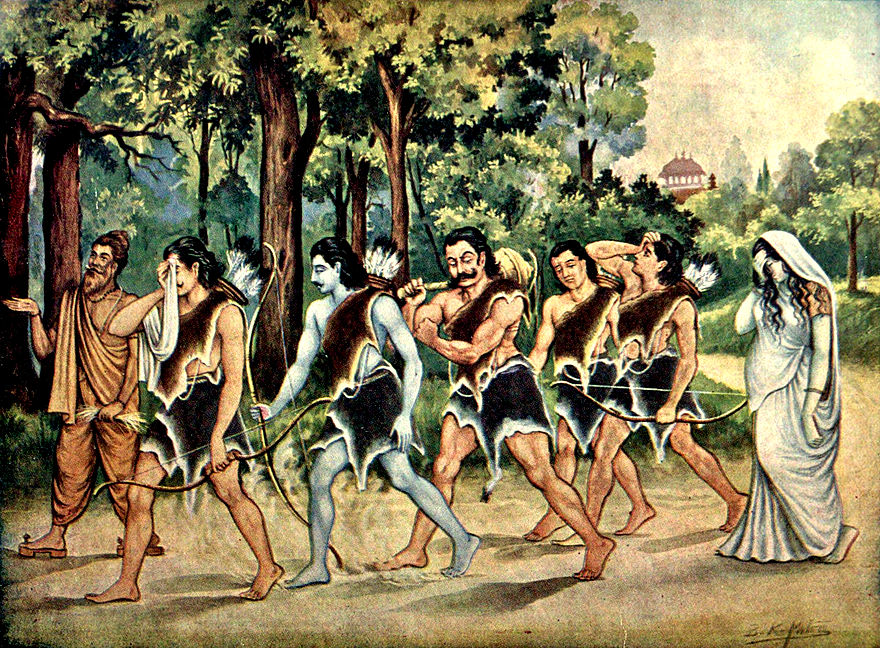 Arjuna did as he was told and headed for the Himalayan mountains. When Arjuna entered a forest at the base of Mount Himavat, he saw that it was devoid of human beings; however, he could hear the sounds of conches and drums from the heavens. He soon passed through many woody regions until he came to the peak of Mount Himavat. It was there that he decided to perform austerities and worship Lord Shiva. In the beginning of his austerities, he ate withered leaves that fell from the trees. When the fourth month came, that best of the Bharatas began to subsist on air alone. With his arms upraised and standing on his tiptoes, he continued his austerities.

Then all the rishis, suffering from the heat of Arjuna’s tapasya, went to Lord Shiva and complained, “O god of gods, we do not know the reason why the son of Kunti is performing these severe austerities. He is, however, causing us pain. Heated by his asceticism, the world is smoking in all directions.” 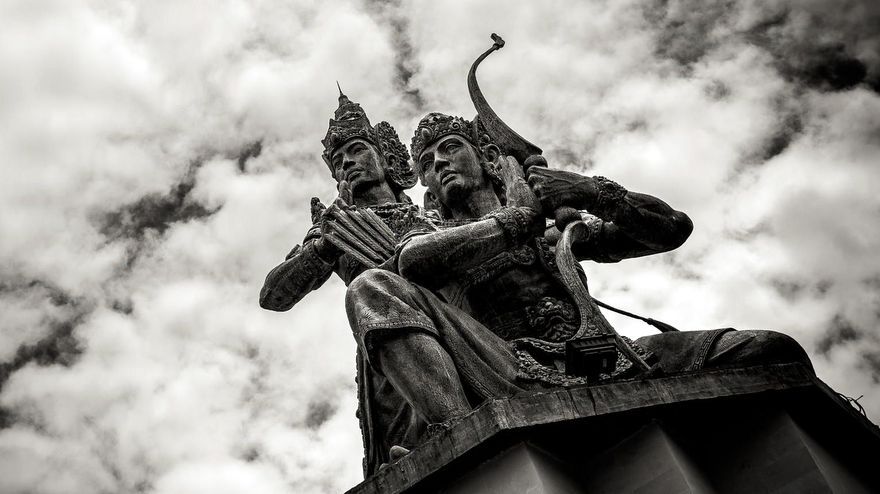 Lord Shiva replied. “Cheerfully return to your ashramas. I know the desire of Arjuna’s heart. His wish is not for heaven, nor for prosperity, nor for a long life. I will fulfill the desire for which he has come here.”

Lord Shiva then took the form of Kirata, an inhabitant of the mountainous regions, and along with Uma, who also took the form of a Kirata woman, went to see Arjuna. As he was approaching Arjuna, a demon named Muka, taking the form of a boar, sought to kill Arjuna. Arjuna immediately took up his Gandiva bow and aimed towards it. 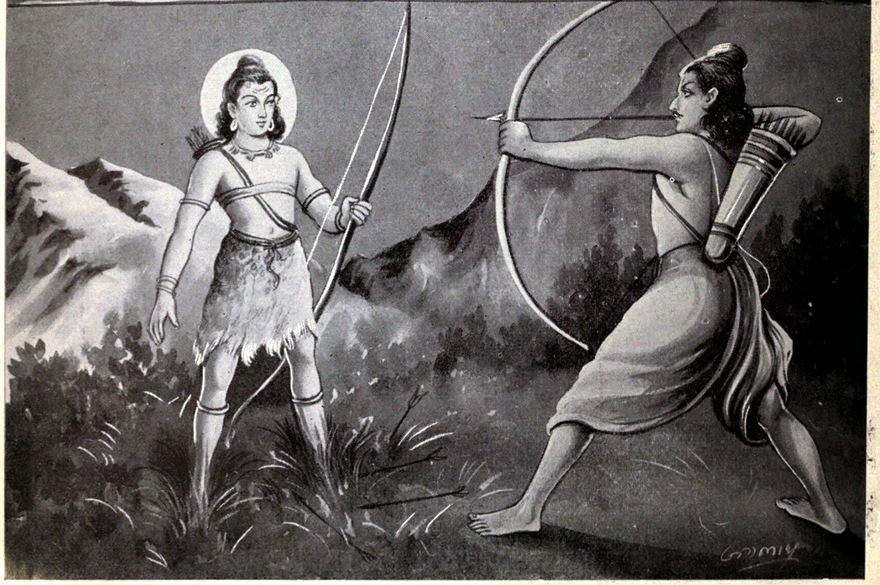 Beholding Arjuna about ready to kill the boar, Lord Shiva ordered, “Do not kill this boar for I have aimed at it first!” However, Arjuna disregarded that order and shot the boar. The Kirata also let loose his arrow at the same time, and both arrows hit the boar, resounding like Indra’s thunderbolt. When the boar was hit, it gave up its life assuming the original form of a Rakshasa. 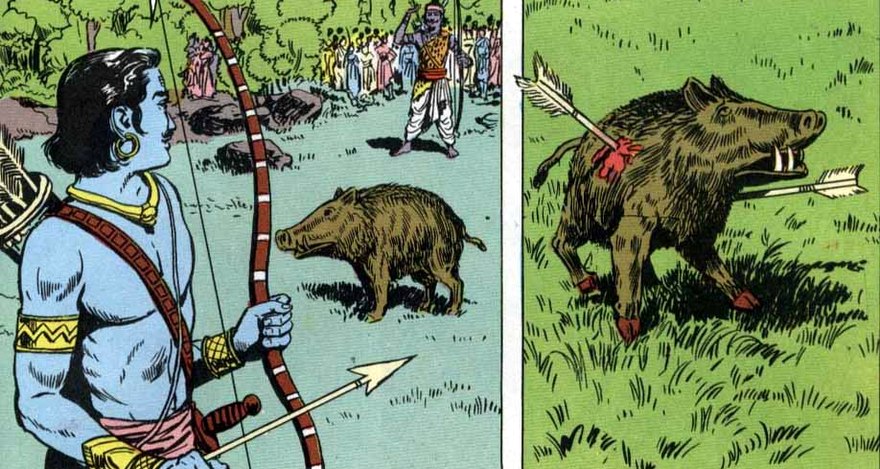 Seeing the Kirata before him, Arjuna inquired, “Who are you, Why have you shot this boar that I aimed at first? This Rakshasa was seeking to slay me, and therefore I have released my arrow. You have not acted according to hunting codes, and therefore, I challenge you.”

“I shot this boar first,” the Kirata adamantly stated, “and it was my arrow that killed the boar. You are proud of your strength, and it behoves you not to attribute your faults to others. You are at fault, O wretch, and therefore, you will not escape with your life.”

Hearing these challenging words, Arjuna released his deadly arrows. Lord Shiva stood unmoved by Arjuna’s arrows. Seeing his arrows ineffective, Arjuna exclaimed, Who is he? Yaksha or asura or some other demigod ? However, I will never mind who he is, I will slay him this moment.” Arjuna then released hundreds and thousands of arrows, but soon his quiver became empty, Arjuna then dragged the Kirata by the bowstring and beat him repeatedly and the sounds were like thunderbolts. However, the Kirata snatched the bow from Arjuna’s hands. Arjuna then took out his sword and ran at the Kirata to kill him. The Kuru prince, with the full force of his arms, brought that mighty sword down upon the Kirata’s dazzling crown. As soon as it touched the crown, it shattered into hundreds of pieces. 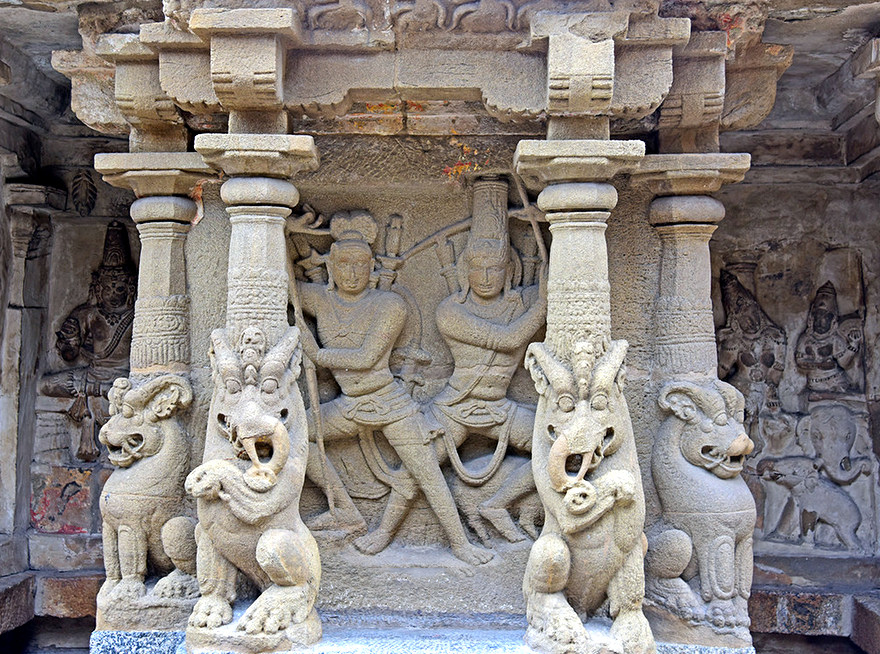 Enraged, Arjuna threw trees and rocks and finally began to beat the Kirata with his clenched fists. Lord Shiva, in the form of the Kirata, returned Arjuna’s blows, and the combined sounds were frightening. Arjuna finally clasped the mighty Kirata in his arms and began to squeeze him with all his might. However, the Kirata also pressed Arjuna to his chest and Arjuna, whose body was weakening, fell to the ground senseless.

Arjuna soon regained consciousness and began to mentally worship Lord Shiva. He mentally offered a garland, and when he looked up he saw that the garland was on the crown of the Kirata. He then understood that the Kirata was Lord Shiva, and overwhelmed with joy, Arjuna fell at his feet. Lord Shiva was satisfied with Arjuna and said, “O Phalguna, I am pleased with you. There is no kshatriya who is equal to you in courage and patience. O sinless one, your strength and prowess almost equal mine. Behold me, O bull of the Bharata race. I will grant you eyes to see my true form.

Arjuna prayed, “O Mahadeva, O Rudra, O bearer of the trident, you are the foremost of all male beings. I bow down to you. O illustrious Sankara, it behooves you to pardon my fault. It was to obtain your sight that I came to this mountain to perform austerities. I seek your protection; pardon me for all the offenses I have committed.”

Lord Shiva then took the hands of Arjuna into his and smilingly said, “I have pardoned you. In your former life you were Nara, the friend of Narayana, the Supreme Lord of lords, the upholder of this universe. This Gandiva bow, O son of Pritha, is fit for your hands. I have forcibly taken it from you with the help of my powers of illusion. Your two quivers will again provide you with infinite arrows. Your body will be free from pain and disease, and no enemy will defeat your prowess. O chastiser of the foes, there is not a being, even in heaven, equal to you, nor is there any kshatriya on earth your equal. Please, ask me for a boon.”

“O illustrious god,” Arjuna said, “if you will grant me any desire, then I request your pasupata astra by which I may obtain victory in battle over Bhishma, Drona, Kripa and Karna.” 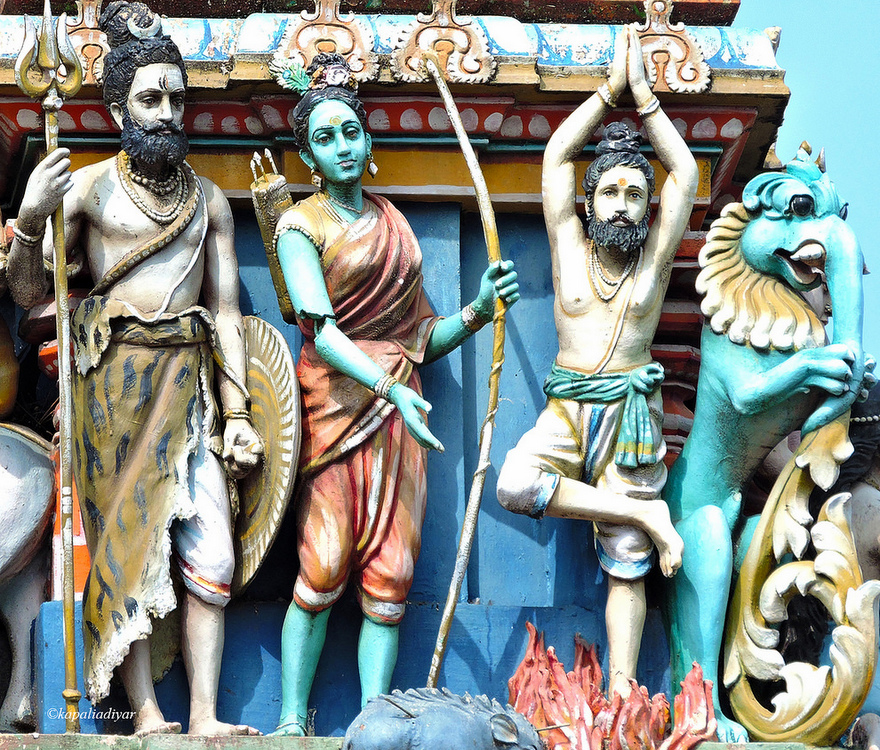 Lord replied, ‘O powerful one. I will give to thee that favourite weapon of mine called the Pasupata. O son of Pandu, thou art capable of holding, hurling, and withdrawing it. Neither the chief himself of the gods, nor Yama, nor the king of the Yakshas, nor Varuna, nor Vayu, knoweth it. How could men know anything of it? But, O son of Pritha, this weapon should not be hurled without adequate cause; for if hurled at any foe of little might it may destroy the whole universe. In the three worlds with all their mobile and immobile creatures, there is none who is incapable of being slain by this weapon. And it may be hurled by the mind, by the eye, by words, and by the bow.'” [VanaParva Chapter 60] 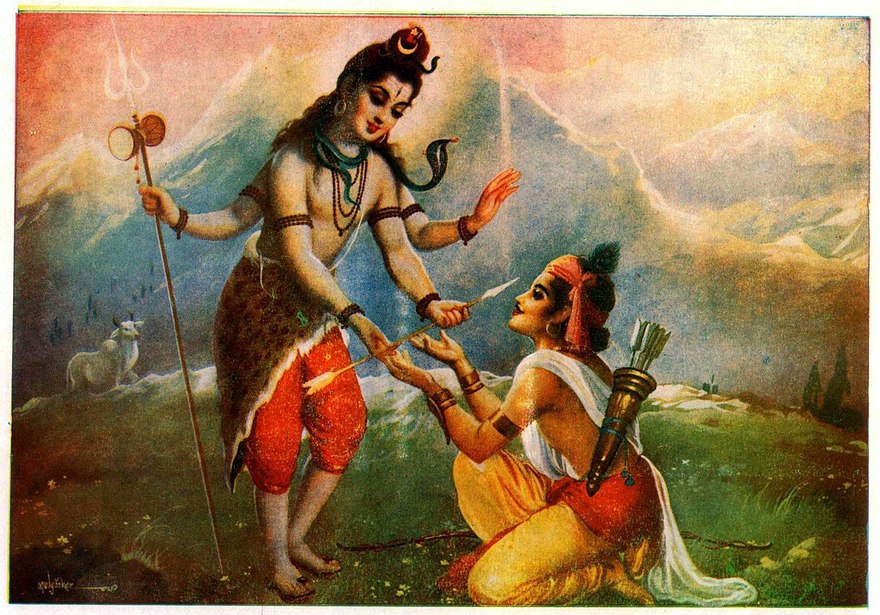 Arjuna then purified himself and requested Lord Shiva, “Please instruct me how to use this weapon.” Mahadeva then instructed Arjuna in every detail of the weapon. The pasupata astra then began to serve Arjuna as it previously did Lord Shiva. 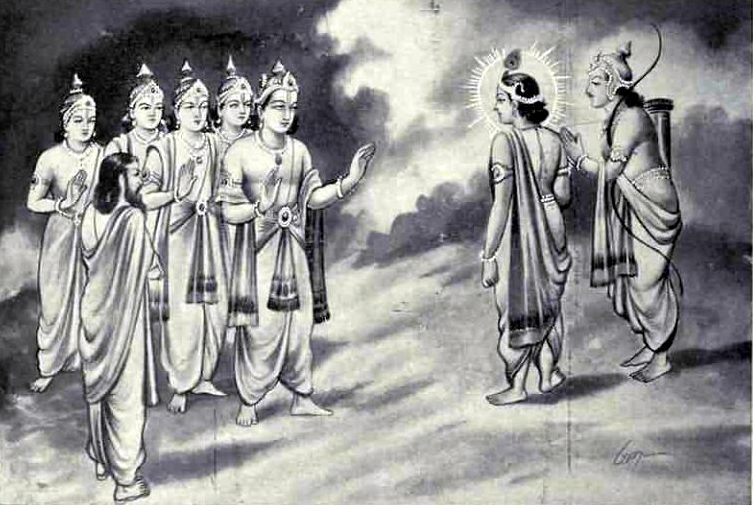 After Shiva left, the Lokapalas appeared before Arjuna and then Kubera, Yama, and Varuna also blessed each of their potent weapons to Arjuna. Indra then invited his son to his palace in heaven.