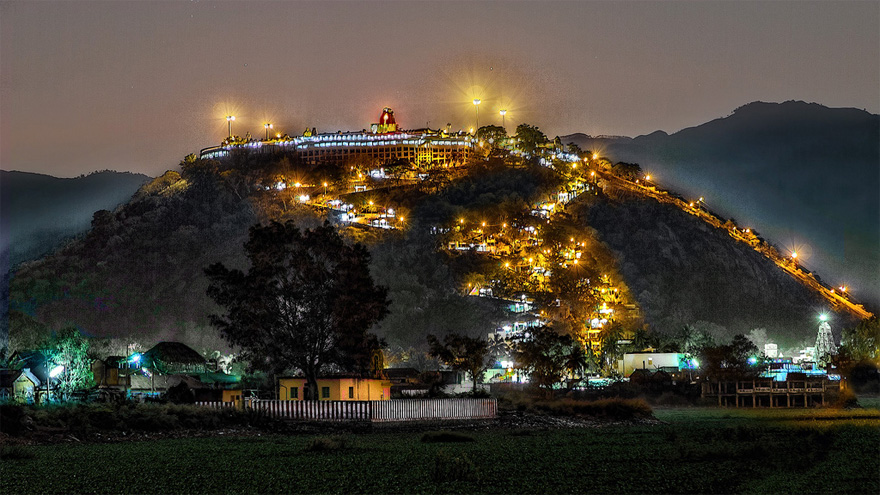 Kali Yuga, the age indicating a period of darkness and degeneration commenced about 3100 BC. Many Hindus believe that the presiding deity of this yugam is Lord Muruga (Kali Yuga Varadan) whose Vel, which symbolises the spear of victory, will eventually restore peace and harmony, destroying arrogance, violence, and injustice. The worship of Lord Muruga goes back to the pre-Christian era and forms an important facet in the religious life of Hindus.

One of the many legends associated with the origin of Lord Muruga states that Lord Shiva emitted sparks from his third eye and these fell into the Saravana Poikai (lake) to become six infants. The wives of six rishis nurtured the babies and were subsequently rewarded to appear as the constellation Pleiades. When the divine consort Parvati beheld the beauty of these children, she embraced them all forcibly together to become one form with six heads and twelve arms. In this form Lord Muruga is known as Shanmukha or Arumuga Swami.

The poet Nakeerar of the Sangam Age sang many songs in praise of the Lord, among them the well known composition Tirumurugartrupadai which describes the six most important abodes of Lord Muruga (Aarupadai Veedu). They are: 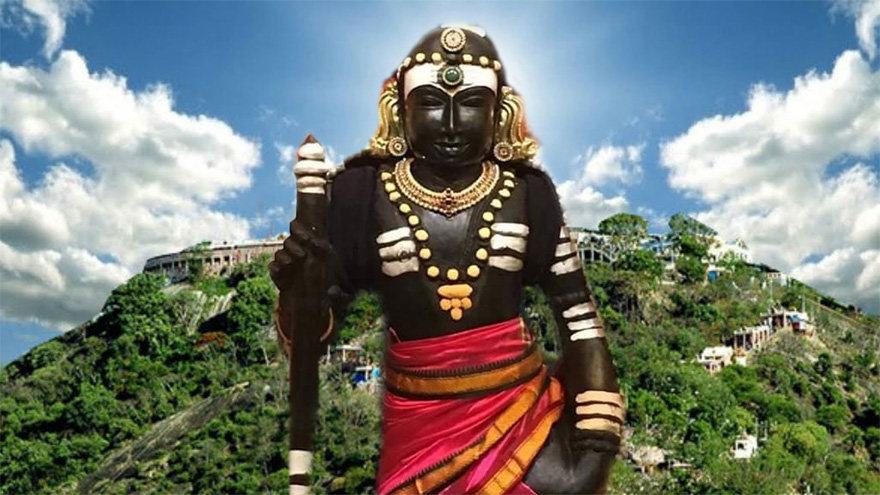 The Subramaniam temple at Tirupparunkunram situated six miles south of Madurai is an ancient shrine dating back to the 2nd century BC. According to legend it was here that Lord Muruga wed Teyvayanai, daughter of Indra, after his victory over Soorapadman and the asuras. The temple built on the northern side of the hill at an elevation of about 300 feet from the foot of the hill has a 150 foot tall gopuram of seven tiers over its entrance. The main sanctum carved into the rock enshrines a well chiselled orm of the Lord. Also hollowed within the rock are many mandapams with carved pillars, platforms, and other shrines with decorative relief and carvings on all surfaces. All abishekams are performed to the Vel in the main sanctum. At the summit of the hill is a shrine dedicated to Kasi Visvanathar, beside which is a statue of the poet Nakeerar in an attitude of great reverence.

One of the most popular fanes dedicated to Lord Muruga is situated at Tiruchendur by the shores of the Indian ocean. The 137 foot tall gopuram of nine tiers facing west was constructed in the 17th century AD. The main sanctum enshrines the Lord as Senthilnathan while facing south is a sanctum with a most beautiful and majestic icon of Sri Shanmukha. About 200 feet north is Valli’s Cave cut within natural sandstone rock with a image of Sri Valli. 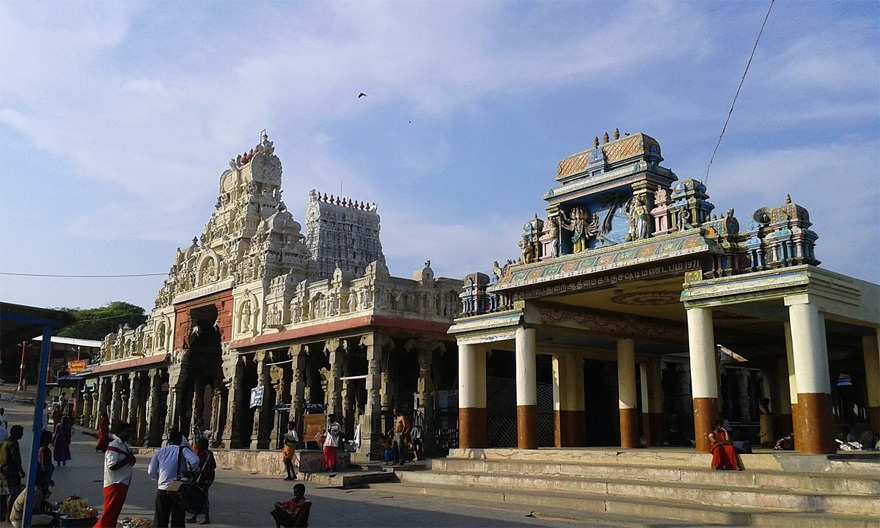 On the southern side of the temple is the Nazhi Kineru (well) which has a smaller well of crystal clear water within it. According to mythology, the well the spot where the Lord threw his Vel to obtain water for his devotees who were parched with thirst. Legend states that it was here at Tiruchendur, after six days of prayer and fasting that Lord Muruga defeated Soorapadman with the Vel given to him by his Divine mother. After his victory he returned to Tiruchendur to offer a prayer to Lord Shiva. 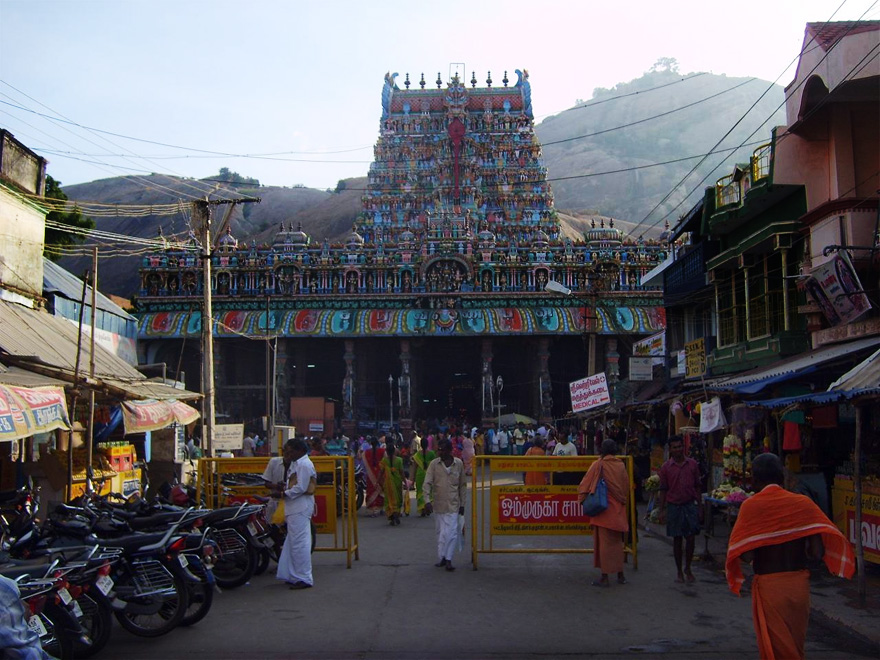 The main festival at this fane is held for six days in October-November each year to re-enact the defeat of Soorapadman. Hundreds of thousands of devotees throng the temple premises and its surroundings to observe six days of fasting and prayer. The faith and love of these devotees for Lord Muruga is demonstrated by the fact that in spite of immense hardship they come to this beautiful and picturesque shrine year after year.

The popular hill temple of Palani in the Western Ghats dates from a remote past and enshrines the Lord as Sri Dandayuthapani. At the foot of the hill is an even more ancient fane named Tiruvavinankudi, also dedicated to Lord Muruga. 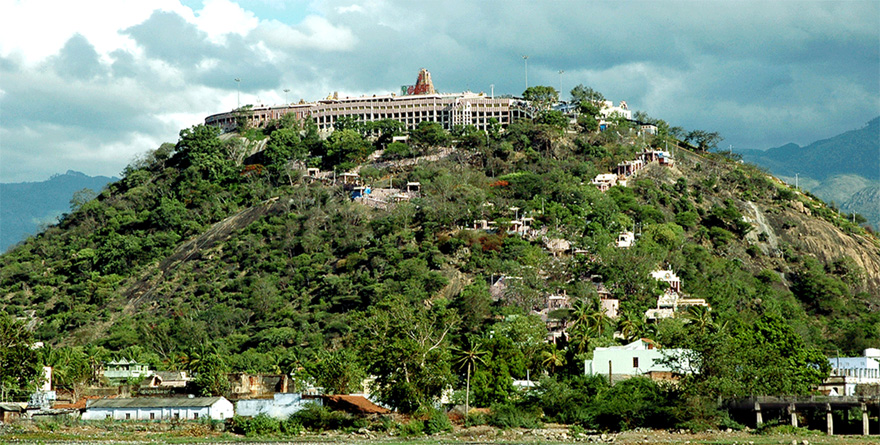 According to mythology, the origin of the temple is based on the story when Lord Shiva offered a mango as a prize to the son who encircled the world first. Lord Muruga set off at great pace on his peacock, while Lord Ganesha went round his divine parents indicating that they were the universe, and thereby won the prize Mango. Lord Muruga in his frustration, clad only in a hermit’s garb and carrying the staff dandam left Mount Kailasa for the South. His divine parents tried to dissuade him saying “Palam Nee”, which in Tamil means “Thou art the fruit of all wisdom nd knowledge” (hence the derivation of Palani). He was not appeased and took up residence at Tiruvavinankudi and later moved to the top of the hill.

During this time the sage Agastyar requested his disciple Idumban to bring the twin hills Sivagiri and Saktigiri from Mt Kailas to the South. Idumban carried them in the form of a “kavadi” and set it down near the Palani Hills in order to rest for a while. When he tried to lift it he found that it could not be moved. He saw a boy with a baton atop one hill and an altercation ensued. Idumban was killed by the boy who was Lord Muruga. On a plea by Agastyar, Idumban was restored to life, and granted the wish that all who carry kavadees to his temples in fulfilment of vows shall be blessed. A shrine to Idumban is seen at the top of the hill. 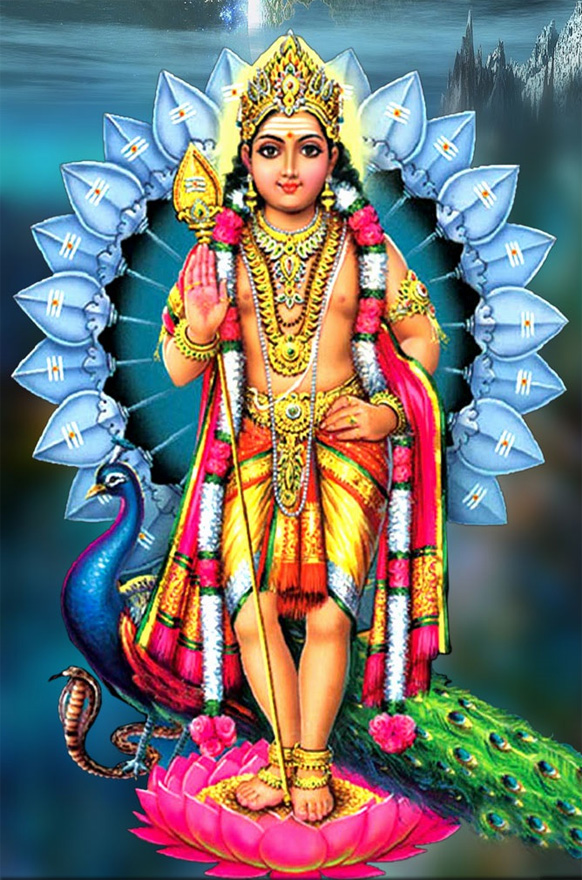 It is believed that a siddha named Bhogar, a younger contemporary of Agastyar, created the icon of the Lord which is enshrined in the sanctum sanctorum. It was made from nine different medicinal minerals, and all materials coming in contact with the icon gained curative properties. However, in recent years it was discovered that certain parts of the icon were wasting away and hence all abishekams are performed to another icon placed in the main sanctum.

In the past pilgrims had to climb 697 stone steps to reach the temple at the hilltop. Since 1966 a haulage winch transports the pilgrims to the shrine, the entrance of which is an extensive quadrangle. The temple itself is very spacious with beautiful mandapams and carved pillars. Throughout the year there is an endless stream of devotees to this shrine. The main festival Panguni Uttiram is celebrated for tne days in March/April each year at the temple at the foot of the hill. The icon of the Lord as Muttu Kumaraswami is taken in procession each day to the delight of the thousands of devotees. 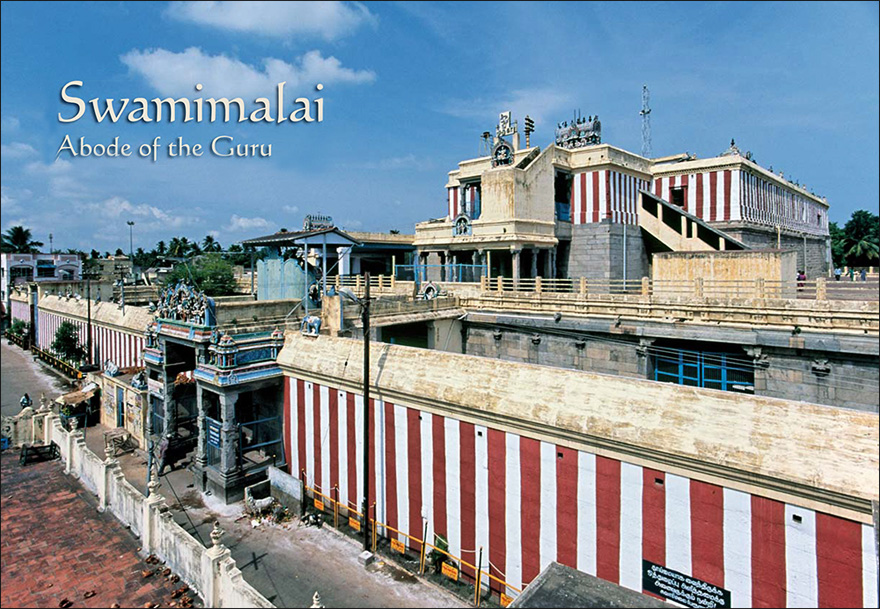 Six miles from Kumbakonam and built on an artificial hillock stands the temple of Sri Swaminathan at Swami Malai. To reach the main sanctum devotees have to ascend 60 steps representing the Hindu cycle of 60 years. A shrine dedicated to Meenakshi and Sundareshwara constructed by Varaguna Pandyan of Madurai, and another to Ganesha stands at the foot of the flight of steps.

Midway up the steps is a life-sized icon depicting Lord Muruga imparting the pranava Mantram to his divine father Lord Shiva who assumes a posture of folded hands and bowed head before his guru. In the sanctum santorum the presiding deity is represented by a six foot tall granite icon in a standing posture offering darshan to all his devotees.

About one mile from the temple is the main centre where artistic icons in bronze are created by highly skilled craftsmen in continuance of the Chola tradition. Many foreigners order icons of their choice from this centre which is well equipped to despatch their selections to their respective countries. 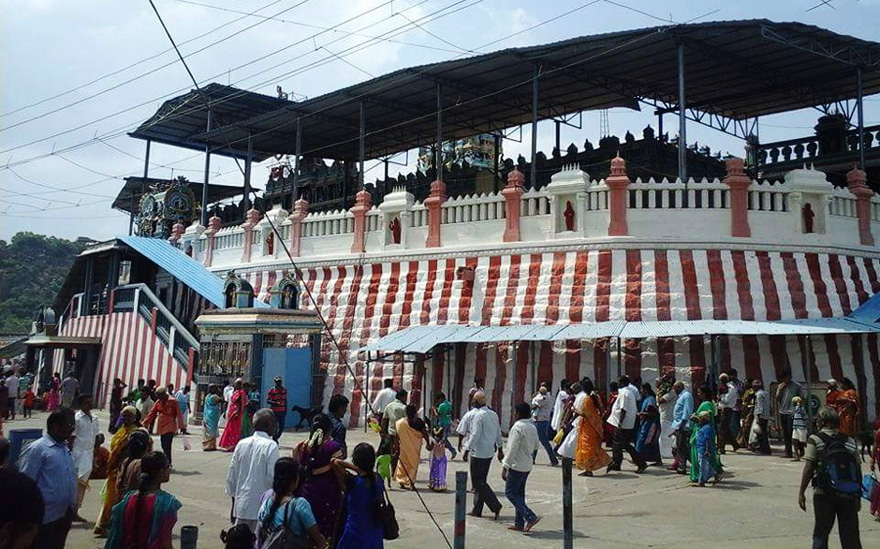 The name Tiruttani means ” blissful repose” and it is here that Lord Muruga went to lead a life of meditation, and where he is known as Tanikasalam. This temple, about 60 miles from Chennai is on the hill called Tanikai Malai and can be reached by ascending 365 steps or by a motorable road.

According to mythology it was here that the divine marriage of the Lord to Sri Valli took place. The main festival at this temple is on Adi Karttikai day in July/August each year when the temple precincts becomes a sea of humanity. On this day thousands of kavadees of various types are borne across their shoulders by pilgrims dressed in yellow, in fulfilment of vows made to the Lord of Tiruttani. These devotees cheerfully dance their way up the steps overcome by the hypnotic music and kavadi songs. A float festival also takes place on this day at the Saravana Poikai at the foot of the hill. 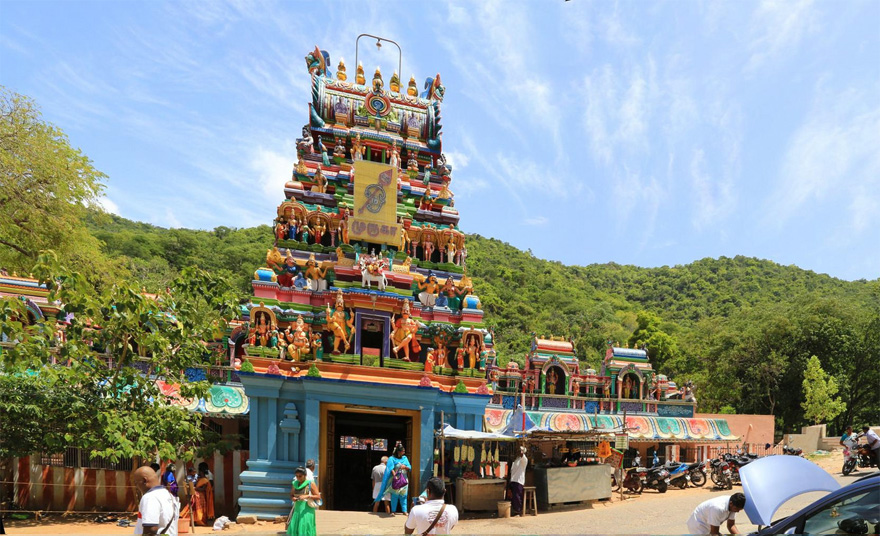 The jungle shrine of Palamuthircholai stands on the slopes of the Alagar hills about twelve miles east of Madurai. The temple is composed of three shrines dedicated to Ganesha, Muruga and Lord Shiva. This fane surrounded by thick jungle presents a picturesque scene of peace and quiet, the only disturbance being created by hoardes of monkeys. Nearby are many waterfalls and spas where pilgrims take a ritual bath. This shrine is of special significance as according to legend, it was the place where the Lord with his two consorts gave darshan to his devotees.

Lord Muruga has graced many of his ardent devotees with the capacity to compose poems and songs of praise. Noteworthy among them are Kumara Guruparan, the author of Pillai Tamil, and Devaraya Swamigal, the author of Kanda Shasti Kavasam. In some instances he assisted them by himself composing the first line of the leading verse of these songs of praise, and further, endowed them with the talent to write them. Arunagirinathar who composed the Tirupugazh, and Kacchiyappa Sivachariar the composer of Kanda Puranam have been recipients of this rare privilege. These literary works have greatly enriched the Tamil language and culture.

These six abodes together with numerous other temples dedicated to Lord Muruga are a vibrant testimony to the continuing worship of this deity by hundreds of thousands of his devotees. At these shrines they find themselves liberated from the narrow prejudices of caste and language. They all become devotees with one goal, of having a darshan of Lord Muruga when they find peace and tranquility for a short while.