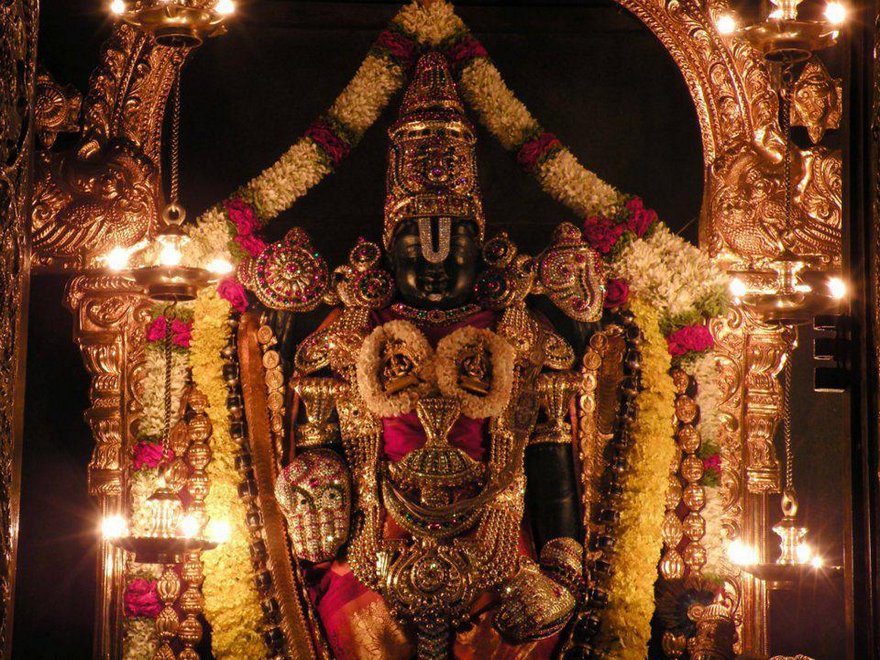 To those with a pure heart, the gates of Vishnu’s spiritual world are always open. But on a precious few days, it is said, that passage is open to all, allowing devotees to more easily reach Vaikunta, the abode of Lord Vishnu, Supreme God to hundreds of millions of Hindus. This is the essence of Vaikunta Ekadashi, a festival marked by fasting, devotion and pilgrimage to famous temples, when devotees draws closer to God in a most personal way.

Who is Lord Vishnu?

In the Vaishnava sect of Hinduism Vishnu is the Supreme God, venerated as the allpervading essence of all beings, the master of time, the One who supports, sustains and governs the universe and all elements within it.

In the sacred Puranas, Vishnu is described as the color of dark blue clouds, having four arms, holding a lotus, mace, conch and a chakra. Through the ages, He manifests in several forms, or avatars, such as Sri Rama and Sri Krishna, to guide humans on the path of dharma. Vishnu’s constant companion is the Goddess Lakshmi. He represents the potential and She the wealth of potentialbrought to fruition.

What is Vaikunta Ekadashi?

Ekadashi is the eleventh lunar day of every fortnight. Of the two dozen ekadashis in a year, Vaikunta Ekadashi reigns supreme. It is known as Mokshada, “bestowing liberation.” On this day, the doors to Vishnu’s divine abode, called Vaikunta, are open wide to all who seek salvation, moksha.

This occurs in the bright fortnight of December/January, the Hindu month of Mrigashira. According to mythology, devas and demons churned the Ocean of Milk for 1,000 years and, amrita, the nectar of immortality, appeared on this day.

What do Hindus do on Vaikunta Ekadashi?

Devotees maintain a total or partial fast and observe mauna, silence, while remembering Vishnu in prayer. While many Hindus fast on all ekadashis, Vaikunta Ekadashi is observed with utmost diligence and self-restraint. A common observance is to consume only water or milk.

What are the Temple Observances?

Devotees flock to Vishnu shrines, especially famous ones such as the Venkateshwara temples in Tirupati and Pittsburg, and the Ranganathar temple in Srirangam. In Srirangam the festival spans 21 days divided into morning and night observances.

Lord Vishnu, adorned in diamond-studded armor, is brought to a 1,000-pillared hall through the northern gate, called swarga vaasal, “heaven’s entrance,” which is opened only this one time each year.

What Else is Celebrated Around This Time?

In the northern hemisphere, winter solstice occurs in this month, heralding longer, warmer days and agrarian prosperity. This transition to the year’s fortuitous half is celebrated with beautiful patterns, called rangoli, drawn with colored rice flour on the fl oor outside homes.

Hindus believe that at this time the divine celestials are most attentive to the pleas of mankind. Devotees rise early, perform ablutions and, throughout the month, visit temples with prayers in heart and gifts in hand.

What is the legend of Ekadashi?

In an ancient story, Ekadashi is a devi, or angel, born of Vishnu’s mind, a fi erce defender of righteousness, a protectress of those in need. Strengthened by unfailing devotion to God Vishnu, she was feared by the forces of evil and ignorance. Vishnu offered her the boon of being rich, famous, powerful and beautiful in the world of mortals. But she declined, saying she wanted only to share her blessings with humans who fast and pray to Him on ekadashi.

Vishnu granted her wish, decreeing that anyone worshiping Him by fasting on the eleventh day of the moon would be allowed access through the celestial gates. In the epic Maha bharata, Lord Krishna relates Ekadashi’s story to King Yudhishthira, praising her and recommending fasting as an ancient and effective spiritual practice.

How is the fast broken? The Ekadashi

fast is normally broken the next lunar day, dvadashi, by partaking of fruit, herbs and milk. The Indian gooseberry, amla, known as a wonder food, is eulogized in the Puranas as the ideal nourishment to jump-start the system after a fast.