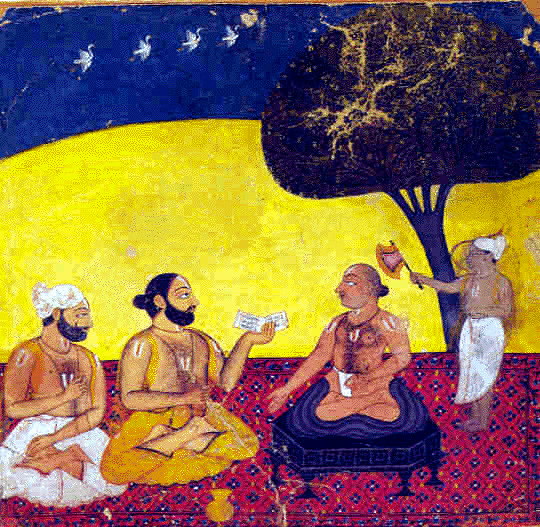 The Vedic literature that has come down to our times is attached to various traditional schools of recitation and ritual called the ‘shakhas’. All the four Vedas have more than one shakha extant. In the past, the number of shakhas studied was many times more.

According to the Mahabhasya of Patanjali, there were 21 shakhas of Rigveda, 9 of Atharvaveda, 101 of Yajurveda (86 of Krishna Yajurveda and 15 of Shukla Yajurveda, according to later authorities) and a 1000 varieties of chanting of Samaveda. Maybe, the number 1000 for the Samaveda merely refers to ‘numerous’. Nevertheless, although only 20 or so Shakhas of the Vedas are extant now, we do possess names of most of the lost Shakhas of the Rigveda, Yajurveda and Atharvaveda. Fragments of many of the lost shakhas are also available as quotations in ancient works. For the Samaveda, we do not have more than 40 names extant.

Two different Vedic shakhas might share one or more texts amongst themselves. Conversely, the distinction between two shakhas of the same Veda might result from the use of a different Samhita text, and/or a different Brahmana text, and/or different Kalpasutra text and so on. For e.g., the Baudhayana and the Apastamba shakhas use the same Taittiriya Brahmana, Taittiriya Samhita and Taittiriya Aranyaka but follow different Kalpasutras. On the other hand, the Shankhayana and the Kaushitaka shakhas use the same Samhita and Shrauta Sutra but their brahmanas have slightly different readings and their Grhyasutras are quite different.

A group or a community of people who study a particular shakha in its entirety (Samhita + Brahmana + Aranyaka + Kalpasutra + any additional texts) and perform its ritual constitute a ‘charana’. For instance, Brahmins who study the Taittiriya Samhita/Brahmana/Aranyaka together with the Kalpasutra of Apastamba say – “I follow the Apastamba charana’.

In certain cases, we have instances of ‘mixed shakhas’. For instance, the followers of Shakala shakha have adopted the Kalpasutra of Ashvalayana. The Ashvalayana shakha, which had the now well-known Ashvalayana Sutra, has in turn lost oral traditions of its Samhita. Likewise, the Kaushitakins of Kerala often use the Samhita of Shakalas.

The various shakhas of the Vedas were, at one time, spread throughout South Asia. Their geographical location has not been constant down the ages, as communities of Brahmins professing a particular shakha migrated from one part of India to the other, or adopted another shakha when it became impossible for them to sustain the tradition of their own shakhas.

It is quite certain however, that the tradition of recitation of the Vedic texts originated in north India, and this region was the area where almost all the shakhas originally arose. From various sources, we can determine the following geographical distribution of Vedic Shakhas at various intervals of times, and their present state of survival:

Shakala RV:Thrives in Maharashtra, Karnataka, Kerala, Orissa, and Tamil Nadu and to some extent in Uttar Pradesh. Might have existed in Punjab. Nambudiris of Kerala recite even the Brahmana and Aranyaka with accents. Accented manuscripts of Brahmana and Aranyaka are available to this day.

Shankhayana Rigveda: Gujarat and parts of Rajasthan and Maharashtra. Oral tradition extinct, only manuscripts of Samhita are extant. Ritual lives in a very fragmentary condition

Bashkala RV: Claims have been made about its existence in Kerala, Rajasthan, Bengal and Assam as a living tradition, but have never been verified. The Samhita exists in manuscript. Nambudiris of Kerala are said to follow this Shakha of RV as far as the Samhita is concerned but studies of their oral tradition do not seem to bear this out.

Ashvalayana RV: Manuscripts of the Samhita have been found in Kashmir, Maharashtra (Ahmadnagar) and Patna (Bihar). In parts of central and eastern India, Shakala RV texts are often attributed to Ashvalayana. For instance, the Aitareya Brahman is often called Ashvalayana Brahmana in West Bengal. Oral traditions extinct although the followers of Shakala Shakha in Maharashtra often term themselves as Ashvalayanas because they follow the Kalpasutra (Shrautasutra + Grhyasutra) of Ashvalayana.

Paingi RV: Existed in Tamil Nadu, in and around Andavan. Oral traditions lost but Brahmana texts rumored to exist.

Mandukeya RV: Magadha and eastern and central Uttar Pradesh. Possibly lower Himalayas in Uttarakhand and Himachal Pradesh. No text or oral tradition extant although the Brhaddevata and Rigvidhana might belong to it.

Shaunakiya AV: Gujarat, Karnataka, Rajasthan, Coastal Andhra Pradesh, Avadh region in Uttar Pradesh, Himachal Pradesh. Only Gujarat has maintained the oral traditions, and the shakha has been resuscitated in recent times in Tamil Nadu, Karnataka and in Andhra Pradesh.

Staudayana AV: According to Majjhima Nikaya, followers of this shakha lived in Koshala (central and eastern Uttar Pradesh). The shakha is completely lost.

Paippalada AV: Followers are currently found in parts of Orissa and adjacent areas of Bihar and West Bengal and recite the Samhita in ekasruti (monotone syllable). Epigraphic and literary evidence shows that they once thrived in Karnataka, Kerala, Maharashtra, and parts of Gujarat, East Bengal and in Tamil Nadu as well.

Devadarshi AV: According to literary evidence, followers of this Shakha once lived in coastal Andhra Pradesh. Other AV shakhas said to have been prevalent in that region were Shaulkayani and Munjakeshi. The shakha is completely lost.

Charanavaidya and Jajala AV: Perhaps existed in Gujarat, Central India and adjacent parts of Rajasthan. According to the Vayu and Brahmanda Puranas, the Samhita of the Charanavaidya shakha had 6026 mantras.

Mauda AV: According to some scholars, they existed in Kashmir

Madhyandina YV: Currently found all over North India- Uttar Pradesh, Haryana, Punjab, Bihar, Madhya Pradesh, Rajasthan, Gujarat and even Maharashtra (up to Nashik), West Bengal, Assam, Nepal. Along with Taittiriya Yajurveda, it is the most prevalent Vedic shakha. Followers of this school were found in Sindh (Pakistan) in the 19th century but became extinct after Hindus were ethnically cleansed by the Muslim majority after 1947.

Kanva YV: Currently found in Maharashtra, Tamil Nadu, and Andhra Pradesh. In Orissa, the followers of this shakha follow a slightly different text. Epigraphic evidence shows that they were once present all over India, as far as Himachal Pradesh and possibly in Nepal.

Maitrayani YV: In Morvi (Gujarat), parts of Maharashtra (Naskik/Bhadgaon, Nandurbar, Dhule). Earlier, they were spread all the way east up to Allahabad and extended into Rajasthan and possibly into Sindh.

Kathaka YV: The oral traditions became extinct possibly a few decades ago. They were found in central and eastern Punjab, Himachal Pradesh, possibly west Punjab and NWFP. In later times, they got restricted to Kashmir, where all their extant manuscripts have been unearthed. Recently, the entire Hindu minority was cleansed from the Kashmir valley by Islamists, and so the shakha might be deemed extinct completely now.

Kapisthala Katha YV: Found in West Punjab around the time of the invasion of Alexander. Also in parts of Gujarat. Only a fragmentary Samhita and Grhyasutra text exist, and followers of this shakha are said to exist at the mouths of Narmada and Tapi rivers in Gujarat.

Jabala YV: Central India, around the Narmada region. In Maharashtra, there still exist Shukla-Yajurvedin Brahmins who call themselves ‘Jabala Brahmins’, but there is no knowledge of the existence of any texts of this shakha.

Taittiriya YV: Buddhist texts and some versions of Ramayana attest their presence in the Gangetic plains but currently they are found all over Southern India. The Taittiriyas are themselves divided into numerous sub-schools. Among these, the followers of Baudhayana and Apastamba were found all over South India (including Maharashtra), while the Hiranyakeshins were found mainly in Konkan and Western Maharashtra. The Vaikhanasas have a more eastern presence- around Tirupati and Chennai. The Vadhulas are present currently in Kerala and earlier in adjacent parts of Tamil Nadu. The Agniveshyas, a subdivision of the Vadhula immigrants from Malabar, are found around Thanjavur in Tamil Nadu. The Apastamba, Hiranyakeshin, Vaikhanasa and Baudhayana schools have survived with all their texts intact. The Vadhulas survive, with most of their texts while the Bharadvajas and Agniveshyas are practically extinct as a living tradition although their fragmentary/dilapidated texts survive.

Kauthuma SV: Gujarat, Maharashtra, Tamil Nadu (tradition revived with the help of Brahmins from Poona), Kerala, Karnataka, Uttar Pradesh, Bihar (tradition revived a century ago), West Bengal (tradition has been revived recently). There are numerous varieties of Kauthuma chanting. This shakha is the most vibrant tradition of Samaveda.

Ranayaniya SV: Orissa (manuscripts available, status of oral tradition not known), Maharashtra, Karnataka (the Havyak community for instance), Uttar Pradesh (till recently in Bahraich and Mathura), Rajasthan (till recently in Jaipur). The existence of this shakha was endangered till recently, but it has been strengthened with the help of institutions like the Kanchi Kamakoti Matha.

Jaiminiya/Talavakara SV: Two distinct sub streams- the Namudiri recitations in Central Kerala, and the recitations of Tamil Nadu Brahmins in districts adjacent to Kerala and in and around Srirangam. The survival of these schools is endangered.

Shatyayaniya SV: Said to have been prevalent in Tamil Nadu and parts of North India. The shakha is no longer extant.

Bhallavi SV: Said to have been prevalent in Karnataka and parts of North India

Other Shakhas of YV: A text called ‘Yajurvedavriksha’ gives the geographical distribution of more than 100 Shakhas of Yajurveda. This description is being left out for brevity. 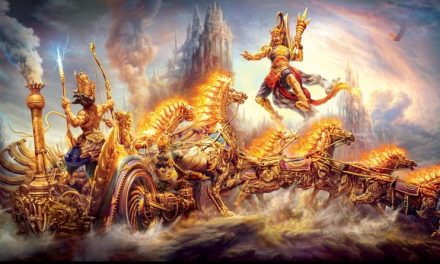 Karna – Was He a Hero or a Villain?