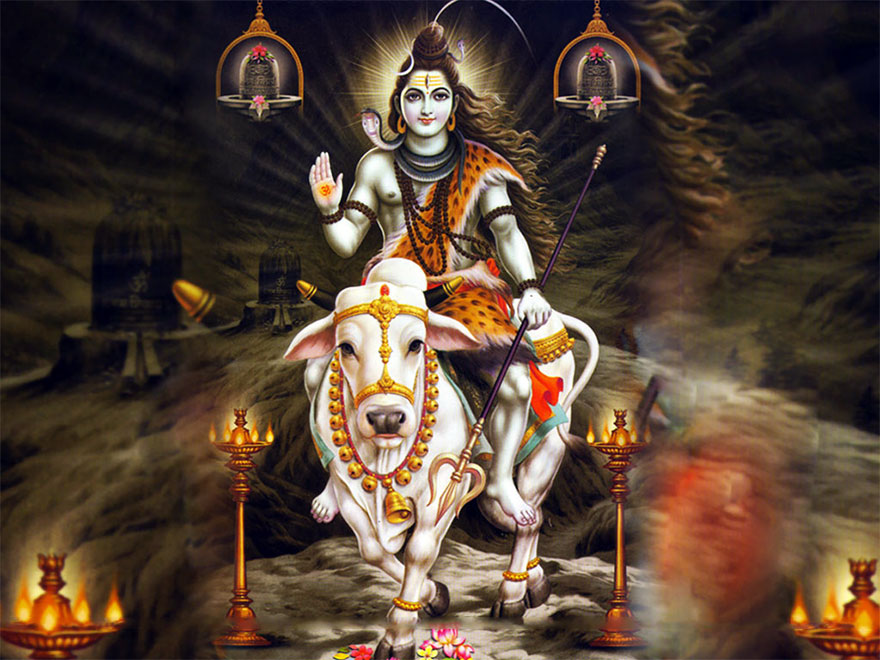 The sun rises every morning and sets every evening, water evaporates and comes back to us as rain. If you look at creation around you, everything to do with it is a cycle. Nothing is permanent and there is no such thing as destruction. Einstein retold us that energy can neither be created nor destroyed, it only changes form, something which the vedas have been telling us for the last fifty thousand years.

Just because the day is over and the sun has set does not mean that the day will not come again, the darkest of nights leads to the brightest of days. Creation consists of opposites, to make a whole. When these opposites diverge it is called destruction and when they converge it is called birth. This movement being endless and complete (poorna), the nature of shiv and shiva.

If you look at a shivalinga carefully you will be able to sense this movement in it. The shivalinga is an oval, oval in all dimensions. As one spirals towards the wide center, there is creation, spiraling towards the narrow ends being dissolution. The purpose of sadhana is merger with the core, from where it all emerges and goes back to, that is the experience of shiv, of light and darkness, of silence and sound, of birth and destruction. And this experience is not limited to specific religion or community. The Black Stone, which lies half buried in the South Eastern wall of Kaaba, looks similar to at least my eye, the philosophy behind it I cannot comment upon. More such stones, some several thousand year old, have been discovered in different parts of the world, hinting that maybe the concept of shiv is a universal concept, as is the concept of its opposite – shakti. The term ‘allah’ is sacred to the muslims, the same word in Sanskrit means ‘the supreme goddess’. It might seem like a coincidence, but if so, it is too much of a coincidence for allah is another name for goddess Durga, the highest form of shakti. It seems like we are brothers, doing the same thing in different ways…wonder what the fighting is all about. Guru Nanak started his thought after making a pilgrim to Hajj, clearly he too had no doubts about the piousness of the place. Guru Gobind started the Khalsa after doing a yagya of shakti.

Sound is a powerful medium for manifestation of thought. Mantra, which is a codified sound, has the potential to create anything in the physical – be it a material desire or the form of shaktis that run this creation. On the night of shivratri, the ability of mantras increases by many times and effects generated far exceed several months of mantra sadhna combined. Mantra has to initiated by a guru who has himself perfected it only then it fructifies inside you. When a Guru chants a mantra, there is a manifestation of the God/Goddess for whom the mantra has been chanted. The sound or dhwani generated by the mantra touches the core of your being and you have the vision of the specific God/Goddess. This is what a Guru is.

Sanatana Kriya details the panchakshara mantra, ‘namah shivaya yavashi mana’. Let me tell you something extremely interesting about this mantra. Recently I came across a verse from the Bible (Chapter 42, verse 8) where God is telling Jacob how he should be addressed, He says שְׁמִ֑יה֣וּאיְהוָ֖האֲנִ֥י (translation in english – I am god. That is my name).The hebrew version of the verse sounds like, a ni yah weh hu she-m. If you repeat this phrase without breaks, it begins to resemble the panchakshara mantra (namah shivaye) when chanted backwards (ya va shi ma na) Try it for yourself –a ni (yah weh hu she-m a ni) (yah weh hu she-m a ni)…The patrons of religion may get into a debate of who copied from whom, or whose God does the said verse refer to, my purpose of mentioning it here is simply to bring out the fact, that whether you call it God or Allah or Shiv, the sounds, shapes and forms remain the same…

The panchakshara mantra when chanted on the night of shivaratri after getting it from your guru and while keeping the awareness of the image of your guru in front of you, will give you the experience of the swaroop of shiv and shakti right in front of you, provided your guru is free from the clutches of maya and has not charged you a fee. If the Guru is a fake then the effects will be disastrous as you will sink deeper into Maya. So the risk is yours…

The Author is the founder of Dhyan Foundation. For more information please visit: dhyanfoundation.com