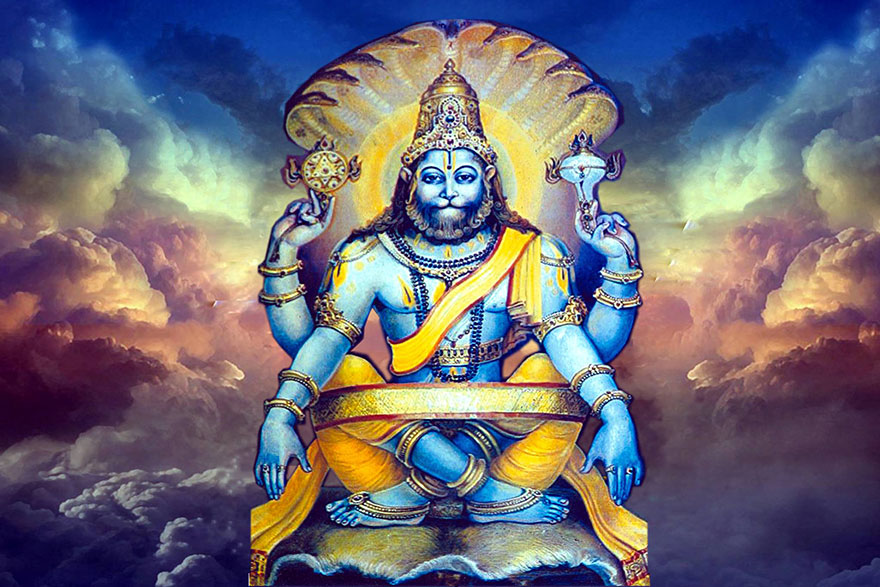 Sri Narad Muni said: “My dear father and lord, master of the Universe, lord of the multitude of demigods headed by Indra, kindly tell me the kavaca mantra of Lord Nrsimha, the incarnation of Visnu. O master, reading this kavaca aloud, a learned man will become victorious throughout the three worlds.”

“Lord Brahma said: My dear Narada, please hear me. O best of my sons, who are rich in austerity, I shall speak this kavaca of Lord Narasimha, which gives victory over the three worlds.”

“My dear boy, by recitation of this kavaca an eloquent person will become victorious throughout the three worlds. It is by reciting this and meditating deeply on it that I (lord Brahma) am the creator of all these planetary systems.”

“It is by reciting and meditating upon this that Laksmi maintains the three worlds, and Lord Siva destroys them. Also the demigods in this way became controllers of the different directions.”

“I shall speak this essence of all Vedic mantras, which wards off all kinds of ghosts and hobgoblins. By its grace the sage Durvasa became victorious throughout the three worlds, commanding respect and most fearful in his anger.”

“For this kavaca, which is directly perceived as giving victory over the three worlds, I (Brahma) am the Rsi, Gayatri is the metre, and the all powerful Nrsimhadev is the Deity.”

“One should place Lord Nrsimha’s mantra bija, ksraum, on one’s head, thinking, ‘May my head be protected by the moon-colored one, who is the greatest among humans. My obeisances unto the ferocious and powerful, the great Visnu, the fiery one, who’s faces are on all sides, the fearful one, Nrsimha, who causes the death of even death personified, or the one who can overcome death.’ One should place this mantra, composed of thirty two syllables upon his head. It is the king of all mantras. It is like a wish fulfilling tree for the demigods and devotees.”

“One should place on his nose the syllables dipta damstraya agni netraya sarva rakso ghnaya sarva bhuta vinasanaya. (Obeisances unto Him, whose teeth are blazing, whose eyes are fire, and who destroys all ghosts and raksasas.)”

“Meditating on the protection of one’s face, one should place there the syllables “sarva jvara vinasaya daha daha paca paca raksa raksa. ksraum ugram viram maha visnum jvalanatam sarvatomukham nrsimham bhisanam bhadram mrtyu mrtyum namamy aham. ksraum bhagavate narasimhya jvalamaline dipta damstrayagni netraya sarva rakso ghnaya sarva bhuta vinasanaya svaha”. (This means: Unto He who vanquishes all fevers, oblations. Burn and burn, cook and cook, protect protect. My obeisances unto the ferocious and powerful, the great Visnu, the fiery one whose faces are on all sides, the fearful one, Nrsimha, who causes the death of even death personified, or who can overcome even death. Unto the Personality of Godhead Narasimha, garlanded with blazing energy, whose teeth are glowing and whose eyes are fiery, who kills all raksasas and demons and annihilates the ghosts, to You my oblations)”

“One should meditate upon the constant protection of the body, placing the mantra kshraum narasimhaya kshraum upon all his limbs.”

“Lord Brahma continued: My dear boy, thus I have told you the embodiment of the potencies of all mantras. Because of your great affection I have explained it to you, although it is not to be spoken to just anyone.”

“Having performed worship of the spiritual master, one may accept this kavaca. Having become enriched in his pious activities he will attain all perfections.”

“Performing the ritualistic ceremonies of purification (purascarya) one hundred and eight times is equal to one tenth the effect received by that best of devotees who chants this kavaca.”

“Laksmi, the Goddess of fortune, and Sarasvati, the Goddess of speech and learning, reside in the home of that fortunate soul who has become perfected by this kavaca, giving up the intoxication of competing with others for supremacy.”

“Simply offering eight times puspajali and reading only once the original version, one attains the result of even a thousand years of worship.”

“If one write this down on a leaf or bark of a tree and keeps it within a golden capsule on his neck or right arm, Lord Nrsimhadev will be personally present.”

“A woman may keep it on her left arm, a man on the right hand. Certainly this most auspicious kavaca brings all perfection to the bearer.”

“A woman who is totally barren, or who bears only one child, or whose sons are lost or dead may become possessed of many sons.”

“By the grace of this kavaca, a man becomes jivan mukta, liberated soul even within this life time. He is able to move the whole universe, and certainly becomes victorious throughout the three worlds.”

“Certainly bhutas, pretas, pisacas, raksasas, and danavas all immediately flee from the country and go to another upon seeing it.”

“In the home or even the same village where this kavaca exists, all such demoniac creatures, once having understood its presence, give up that place and go far away.”

Thus ends the Sri Nrsimha Kavaca, of the Trailokya Vijaya in the Samhita of Brahma.