Traditionaly, Dwadash Jyotirlinga pilgrimage begins with the Somnath temple. The present Somnath temple is an elegant reflection of the past glory of Somnath. Built in Kailsah Mahameruprasad style, it was constructed under the guidance of Prabhashankar Sompura. The temple has Garbhagriha, Sabhamandap and Nrityamandap with a 150 feet high Shikhar. The Kalash at the top of the Shikhar weighs 10 tons and the Dhwajdand is 27 feet tall and a foot in circumference.

The temple has large central hall with entrances on three sides, each protected by a lofty porch. The temple carvings and sculptures speak about the great artistic endeavor of the craftsmen who built it. The main gate faces east, and the sense of space and light is glorious.

The sanctum of the temple is spacious. The shivalinga is huge, and one can see the priests performing different pujas. The doors are silver framed with golden ceilings. The entrance is from Shri Digvijay Dwar, and there is a small temple of Ganesh and Hanuman after the entrance, followed by Nandi. Then comes the garbhagriha, where one can have darshan of the jyotirlinga. A Tripurasundari idol on the right side of the sanctum and Ambika Mataji idol on the left side are offered prayers after the jyotirlinga.

Only the temple trust appointed pujaris are allowed in the garbhagriha and they only can perform puja. Even the trustees or VIPs cannot visit this area. Being the first revered Jyotirlinga, Somnath also has an importance for various yagna related rituals. There are different pujas performed in temple. While no devotee can perform puja here, this is not the case in all Jyotirlingas. Here the task is performed by priests on behalf of devotees. The trust employs more than 1,000 brahmans for the task.

Somnath Temple opens daily at 6 am for the devotees for darshan, and closes at 9 pm. Aratis are performed three times at 7 am, 12 noon and 7 pm. Aarti is a 20 minute spiritual symphony of music, a star attraction of Somnath Jyotirlinga.

For the security reasons, nothing is allowed inside the temple, not even coconuts for puja. However, there are adequate locker arrangements to keep personal valuables.

Dhwajarohan at Somnath Temple
Reshmi Dhwajarohan at Somnath Temple is a great event for the devotee, and anyone can perform it. A devotee has to contribute money for Dhwajarohan. The temple authorities provide saffron colored Dhwaja, which has embossed symbols of Nandi and Trishul on it. The devotee performs puja of the Dhwaja near garbhagriha. After that ritual, a temple employee takes dhwaja to the top of the temple and unfurls it.

Somnath Trust Management is among the best of the Dwadash Jyotirlinga circuit temples. The Trust at present has undertaken several development activities, which include the plan to develop various places and expand facilities.

Somnath is located in a village called Prabhas Patan, having a population of about 12,000. Somnath Museum is just 100 meters away from the Somnath Temple. Here one can see the ruins of the ancient Somnath temple, and waters brought from around the world for pranpratishtha ritual. The authorities have preserved this site very nicely.

Somnath, or Prabhas Kshetra, is an important place for Vaisnavas. Lord Sri Krishna established His capital in Dwarka, which was known for its richness. It was the golden era during Lord Krishna’s regime in Dwarka. The Yadavas became arrogant and allowed Dwarka’s glory to wane.

Lord Krishna ended his earthy journey in Prabhash Kshetra (Somnath) along with his elder brother Balarama. This is also the place where Sri Krishna was hit by an arrow of the poacher named Jara, thus the place is known as Bhalka Tirth. After being hit by the arrow, Lord Sri Krishna arrived at the holy confluence of the Hiran, Kapila and Saraswati Rivers, where they join the ocean. He performed His divine Dehtyag leela on the sacred and peaceful banks of River Hiran. 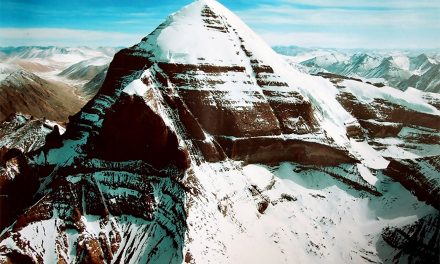 Mystery of the Unclimbed Peak – What Makes Mount Kailash So Intriguing?