Soma – Elixir of the Gods 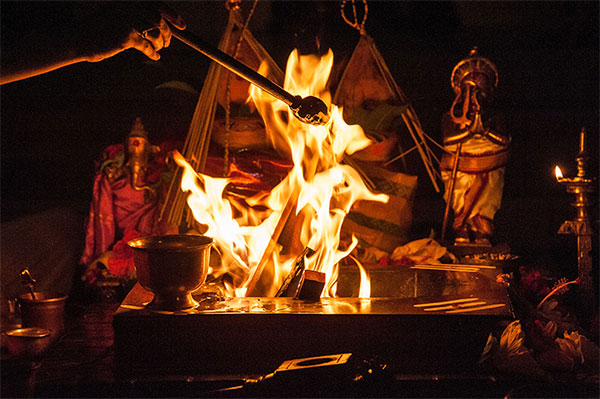 “We have drunk Soma and become immortal; we have attained the light, the gods discovered. Now what may an enemy’s malice do to harm us? What, O Immortal, can mortal man’s deception do?” – Rig Veda 8.48.3

Perhaps the most mysterious of the Vedic traditions is the ritual consumption of Soma, a drink said to grant immortality and communion with the gods. Many have been on a quest to identify its earthly counterpart. Most speculations revolve around plants that produce a stimulating and/or hallucinogenic effect. The spiritual authorities, however, reject any such speculation identifying it as a mundane drug.

In the Vedic tradition, Soma is simultaneously a plant, a person (god), and a heavenly body (the moon). It is said that Sage Atri, one of the Seven Sages of the Universe, once cried in jubilation, and from his tears of joy was born his son Soma. Tears that are shed due to anger or sadness are hot, but those shed from joy are cool. Because of this the moon was full of soothing rays. He is said to be a fair and handsome youth, one who was raised by the Seven Mothers to be a Sage and Seer.

As a plant we are told that Soma was sacrificed, crushed through stones to express the liquid.

“Freeing himself he flows away, leaving his body’s severed limbs, and meets his own companion here.” -Rig Veda 9.14.4

The liquid, usually described as golden or bright red, is then poured into milk which is described variously as Soma being adorned with white robes or the milk serving as a healing balm.

The taste is described as sweet, lovely, and pleasant.

But it is the effects of the Soma drink that capture one’s attention: one who consumes it enters a rapture, that is exhilarating, increasing one’s vitality, creativity, and intelligence. We are told it makes one happy, mentally powerful, increases ones sensuality and beauty, prolongs life, and even frees one of sinful reactions.

It is important to note that in the Vedic tradition the moon is intimately tied to all plant life. We learn that Soma is the vital force in all vegetation allowing the living entity to relish the taste of food.

“I enter into each planet, and by My energy they stay in orbit. I become the moon and thereby supply the juice of life to all vegetables.” – Bhagavad Gita 15.13

Experts in Ayurveda will even pick herbs by the phase of the moon in order to unlock their full healing potential. Because of this the moon is known as Annamaya (providing potency to herbs and plants) as well as Amritamaya (the source of life for all living entities).

All plant life then contains moonshine and as such simply by eating a plant-based diet one receives the benefits of the Soma juice – increased vitality, beauty, creativity, and prolonged life. But the effect is subtle and not concentrated.

A comparison can be made with that of air to prana (life force). While air is the gross/physical attribute it contains within it the subtle energy of prana. Simply by breathing air we all receive the benefits of prana in an unconcentrated form. But the yogic practice of Pranayama is not simply to breathe air. Rather it is to stoke the internal fires to distill the prana from the air and to concentrate its effects to expand one’s consciousness. In a similar way, all plant life contains Soma, but it requires one adept in the yogic practice to concentrate it to unlock its full potential.

In the Rig Veda we learn that Tvastar, the maker of divine implements, is the guardian of the Soma drink. He fashions a golden chalice which holds this drink for Indra the King of Heaven. Some view the moon as the cup that Tvastar made to hold Soma, with the waning of the moon the consumption and the waxing the refilling of the vessel. In time the gods ask the Rbhus to create four new drinking cups to hold the Soma so that other gods may partake. 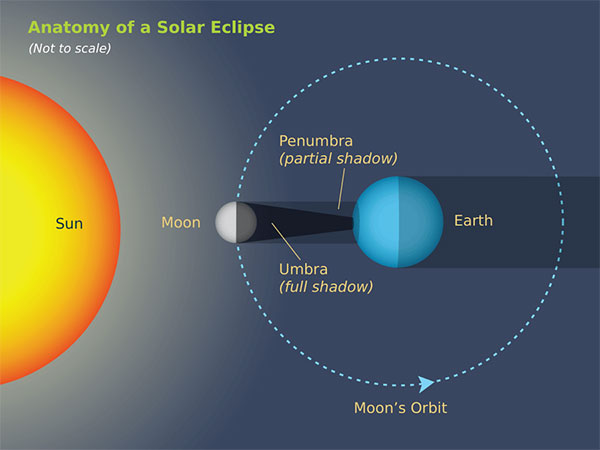 The precision of the movements of the heavenly bodies is something the ancients keenly observed: the spinning of the earth on its axis gives us a day; the spinning of the moon around the earth gives us a month (waning & waxing); the spinning of both around the sun gives us a year. Interestingly, the moon rotates on its axis at exactly the same rate it takes to rotate around the earth. The effect of this is to cause the moon to appear as if standing still with the same face always pointed towards the earth. Another interesting fact, during a total solar eclipse the size of the Moon is exactly in proportion to block out the Sun, despite the Sun having a diameter 400 times that of the Moon. This is due to the fact that the distance between the Earth and the Sun is 400 times that between the Earth and the Moon. The odds are truly astronomical.

During the Churning of the Ocean of Milk, the forces of darkness (demons) and the forces of light (demigods) cooperated to create Amrta – the Nectar of Immortality. The Chief Minister of the demons, Rahu, through subterfuge, begins to drink some of the Nectar. However, the Sun and the Moon see through his trickery and advise Mohini, the female Avatar of Lord Visnu of this deception. She subsequently cuts off his head. 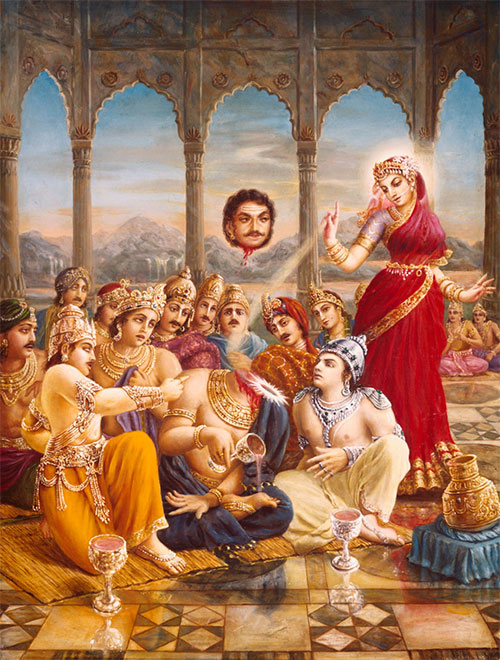 Because the Nectar of Immortality passed through his throat his head remains immortal. Rahu (the head without a body) seeks to consume the Sun while Ketu (the body without a head) attacks the Moon. In art they are depicted as a snake. On a gross/physical level the Solar and Lunar eclipses represent the demon’s severed bodies continually attacking the Sun and Moon as revenge. On a subtle level these eclipses are inauspicious omens that portend trouble from the dark powers of the world.

It is at this point we turn the discussion in a very different direction. One of the most unusual influences on European culture is that of the Vedic god Mitra. This god, who the Romans referred to as Mithras, was a Vedic solar deity. He was very popular among Roman Emperors and soldiers alike. There are literally hundreds of temple remains scattered across the old Roman empire as far off as Great Britain.

How did the Romans come to worship Mithras? While there is debate, it is most likely that Mithraism was brought back by Greek soldiers returning after Alexander’s invasions of the East. The Greeks and Romans were far below the Vedic standard. No doubt much of the religion was changed but a Vedic cosmological pattern was imprinted upon European religious symbolism.

The famed civil rights leader, Dr. Martin Luther King Jr. in fact wrote one essay titled “A Study of Mithraism” in which he concludes that Christianity borrowed “unconsciously” from the Mithraic tradition. Christianity evolved through syncretism with local traditions and was eventually made the official Roman religion under Constantine I (272 A.D. – 337 AD).

A few examples of Mithraic influence on Christianity include:
1) The appearance day of Mithras on December 25 was made the birthday of Jesus.
2) The Jewish Sabbath was moved from Saturday to Sunday (the Roman Solar holy day).
3) Mithras had twelve followers representing the twelve signs of the Zodiac.
4) Mithraism had a religious ritual involving the consumption of bread and wine.

There are many scholars that have done in depth studies of the Mithraic Solar influence on Christianity. But surprisingly almost all seem to miss the Vedic Lunar cosmological pattern in Christian ritual.

For those unaware the central religious ritual of Christianity involves the consumption of bread and wine transformed into the literal flesh and blood of Jesus. This ritual is known as the Eucharist, with the bread described as the ‘host’ or flesh and the wine as the blood. Many modern Christians find the notion of continually killing of their teacher and consuming his literal flesh and blood unpalatable. As such they have instead viewed it symbolically while others have simply discarded the ritual entirely. 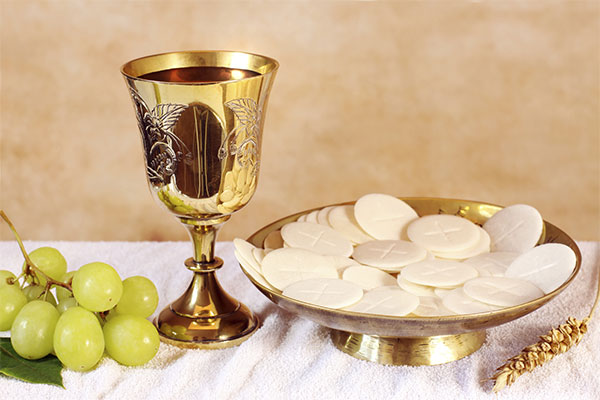 But a comparison with Soma provides a startling number of points of similarity.

We know that Soma is a plant while Jesus is described as a grapevine:

“I am the true grapevine, and my Father is the gardener. He cuts off every branch of mine that doesn’t produce fruit, and he prunes the branches that do bear fruit so they will produce even more.” – John 15:1-2

This becomes even more obvious when we see that both Soma and Jesus are sacrificed. The grapes are crushed to produce Jesus’s blood in the cup of wine.

Both Soma and the blood wine are golden/red, sweet, and provide a gladdening effect. Both grant immortality/everlasting life. Both provide communion with God(s) and both are held in a golden cup.

But there are even more similarities.

Both Soma and Jesus are depicted clothed in white robes. 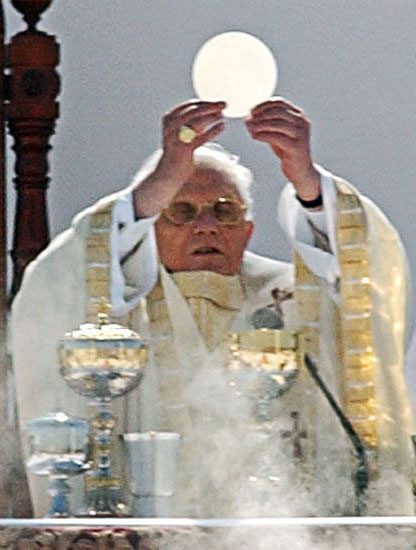 The bread, known as the host, acting as the body of Jesus, is a white circle reminiscent of the moon. 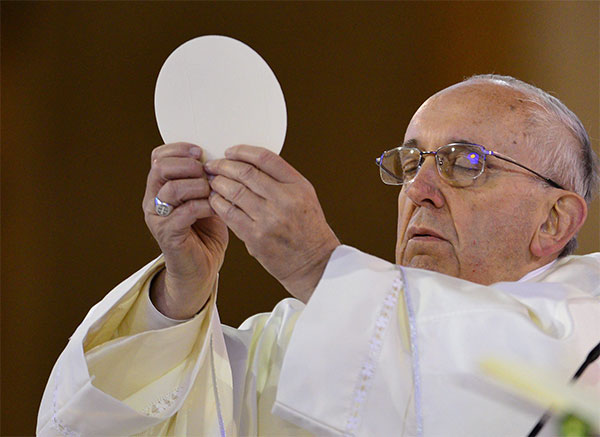 While you may think this is taking symbolism too far wait for the next few points.

During the ritual the host bread is encased in a ceremonial vessel known as a monstrance. This represents the rays of the Sun. 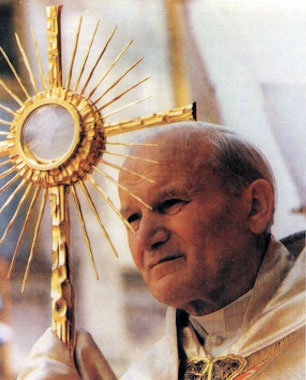 The glass container, holding the bread/body in the center, is known as the Luna (Latin: Moon), and the crescent metal clip that holds the host is called the Lunette (little Moon). 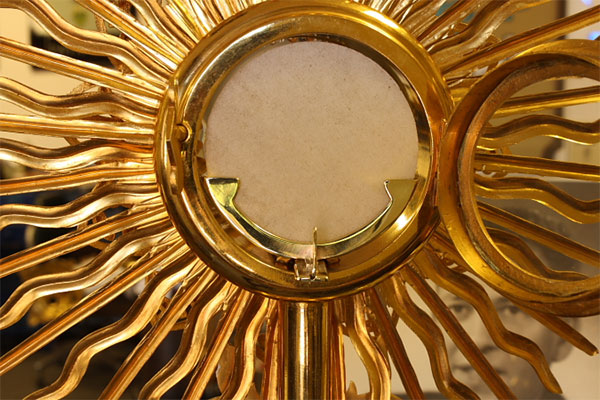 And so we see the Moon (host) held directly in the center of the Sun, symbolic of the Solar eclipse. 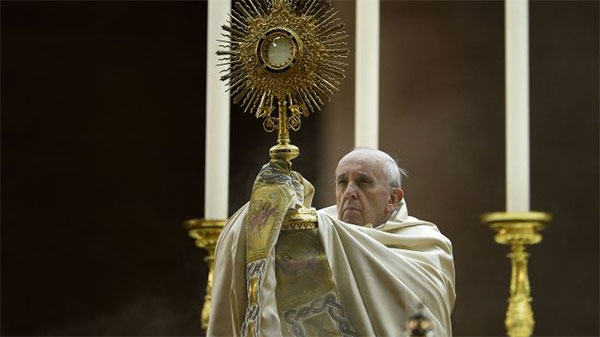 But there is more.

Many Christians believe that signs in the heavens will signal the return of Jesus:

“The sun shall be turned to darkness, and the moon to blood, before the great and awesome day of the Lord comes.” -Joel 2:31

“The sun became as dark as black cloth, and the moon became as red as blood.” Revelations 6:12

Christians refer to these as the ‘blood moons’ which occur as a consequence of an eclipse. Unfortunately Christianity lacks a tradition of astrology and so they do not understand the maleficent effects. The Sun attacked by Rahu becomes black and the Moon attacked by Ketu appears as a golden/red cup full of blood. 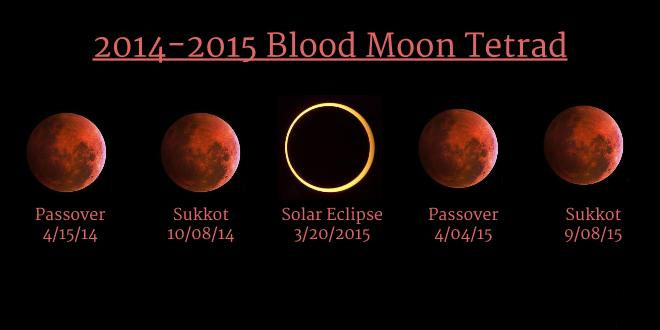 There are four blood moons and one solar eclipse which fall on Jewish holy days starting from 4/15/2014 through 9/28/2015. This signals increased strife and war in the world.

But there is one final and definitive point of similarity. 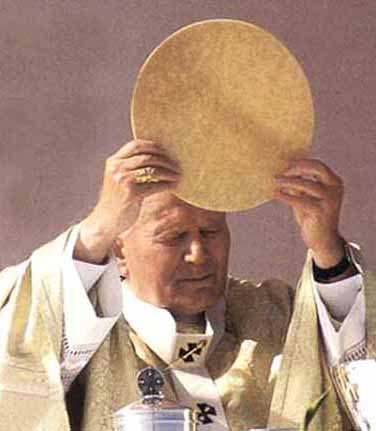 The Bible was originally written in Greek the language of the intellectuals of the time. At the last supper, when Jesus picks up the bread he describes his body with one particular word:

That’s right, the word used in the original Greek for the body of Jesus is Soma. The Greek word Soma is of “undetermined” origin and refers to the body of a plant, a person (mystical/physical), as well as a heavenly body.

With all of these points of similarity we can state conclusively that the central religious ritual of Christianity is patterned on Vedic cosmology.

Mystery of the Bhagavad Gita Simplified 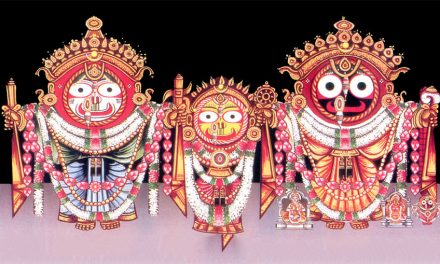