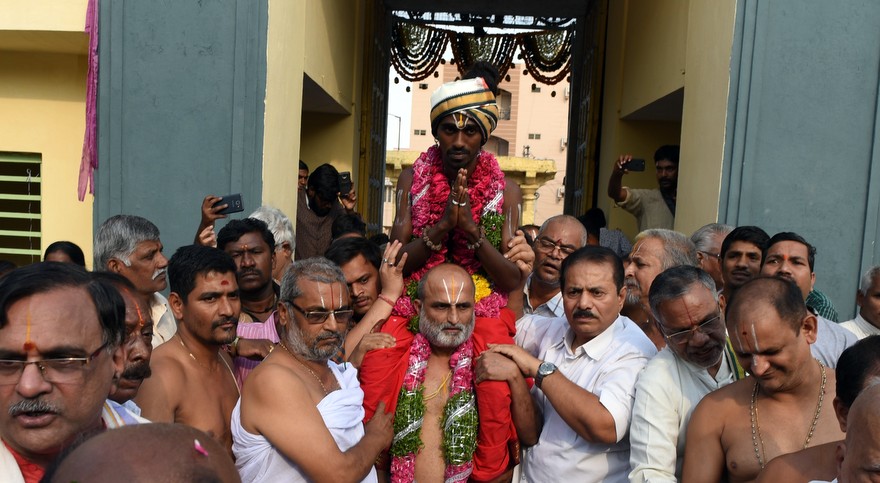 The Muni Vahana Seva is a tradition which reveals the original truth and real nature of “Sanatana Dharma”.

About 2,700 years ago, a Vaishanava priest Loka Saranga carried a Paanar youth on his shoulder into Sri Ranganatha temple at Srirangam on the banks of Cauvery river. 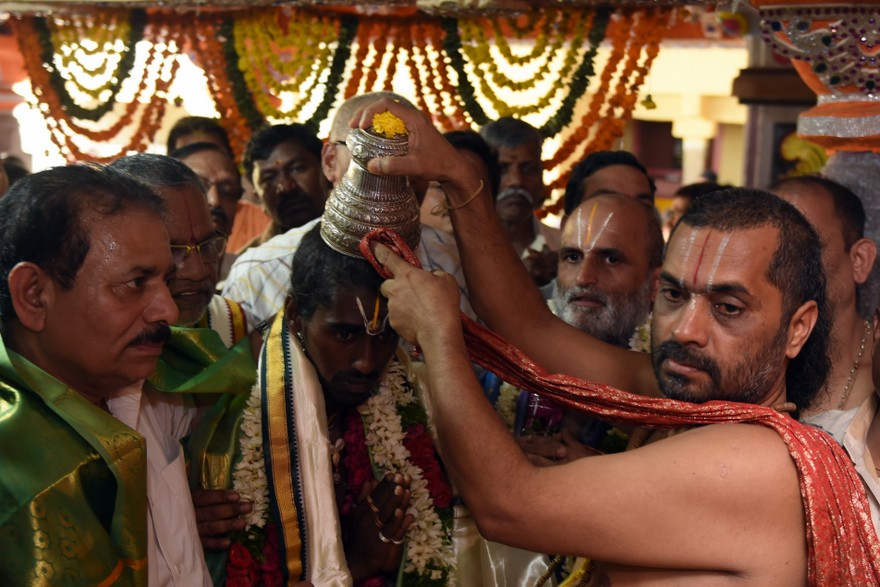 Thiruppaan Alvar is considered the eleventh in the line of the twelve azhwars, who are known for their affiliation to Vaishnava tradition of Hinduism. 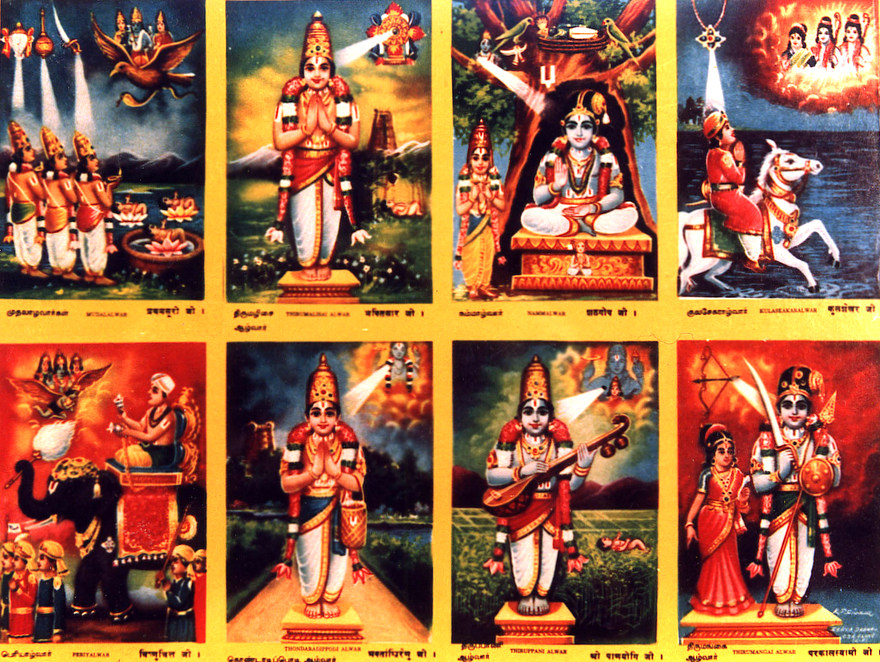 As per Hindu legend, he descended from eternity and was found in a paddy field by a couple from the paanar community. The childless pair cherished the child and fed him with high quality food to avoid influence of deleterious food used by their community Being a divine child, his instincts were heavenly and he grew as a man leaving all glamour of the world. 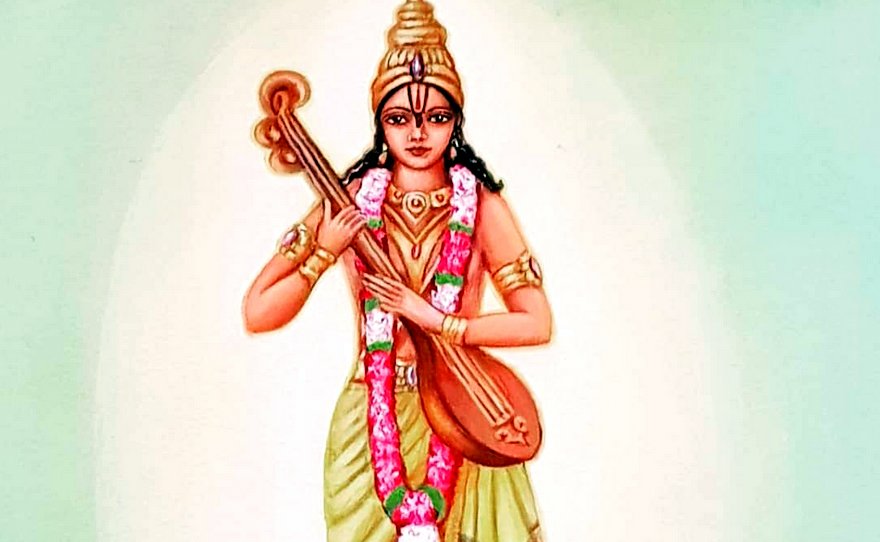 Having a Veena (string instrument) in his hand, he was always to be seen singing the glories of Vishnu. He was soon to be known as “Paanar perumal”. 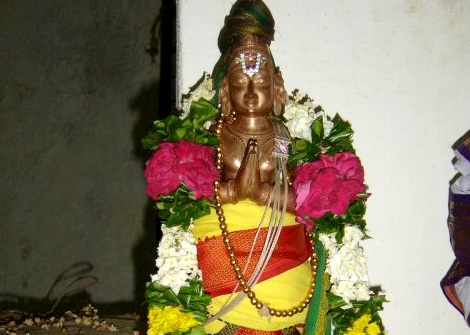 A sage by name Loka Saranga came to the river Kaveri for drawing water for the temple. Panar was in deep devotion and was unaware of his surroundings that he missed the voice of Saranga asking him to leave way. The sage threw a small stone in his direction to wake him, but the stone accidentally hit the forehead of Paanar and he started to bleed. Paanar realised the happening and quietly retired. Unaware of the injury caused to Panaar, the sage returned to the temple. He was taken aback on seeing blood oozing out from the forehead of the image of Ranganatha. That very night, Vishnu appeared in the dream of Loka Saaranga and commanded him to fetch Paanar to the temple the next morning in his shoulders. 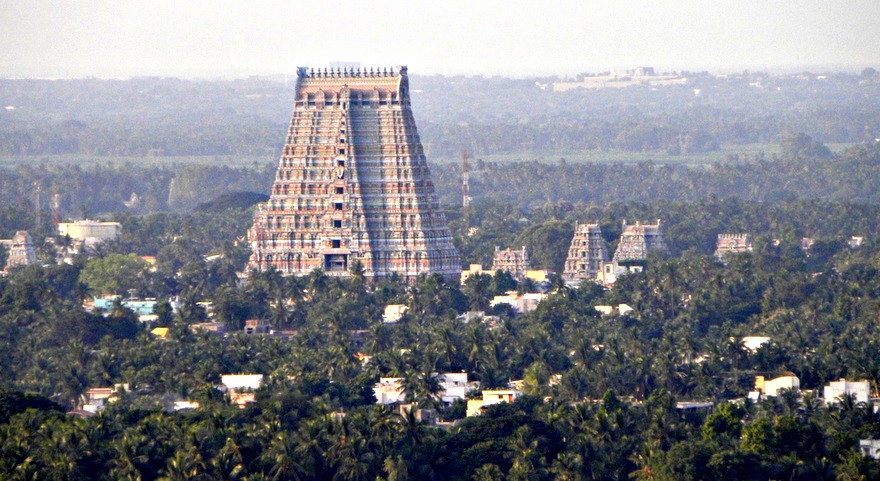 Accordingly, Lokasaranga requested Paanar to come to the temple. But, Paanar, referring to his lowly birth, declined to enter the holy place. When he was told of Vishnu’s commandment, Paanar was beside himself and was lost in a deep trance. Loka Saaranga said that if that were his objection, he could carry him on his shoulders to the temple. 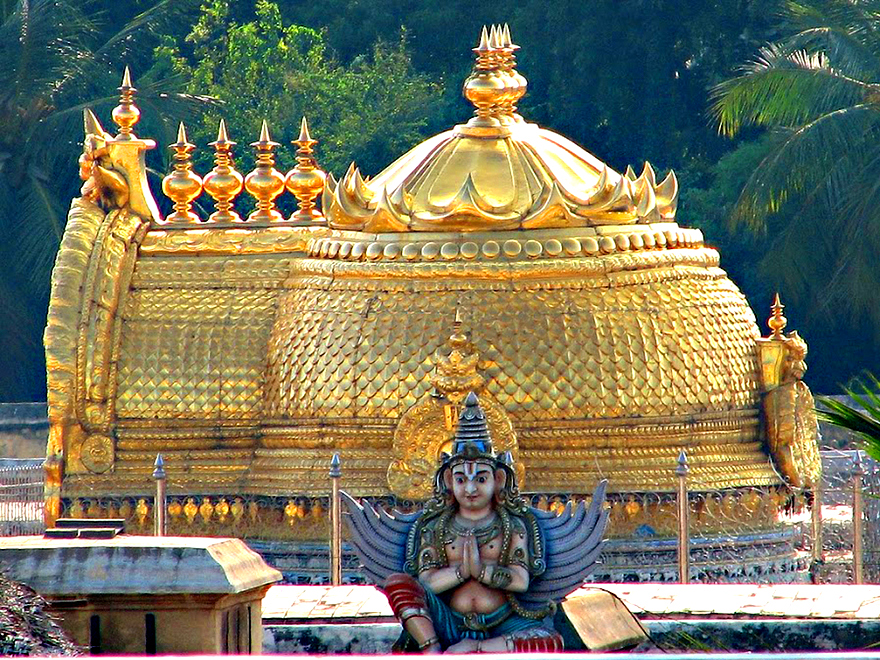 When they reached the sanctum, Paanar experienced the bliss of Ranganatha and composed the Amalan Adhipiraan a poem describing the beauty from head to foot of Vishnu in ten verses and ultimately laid his life and merged with the deity. The poem is considered to be sweeter than even the sound of music of the Veena. 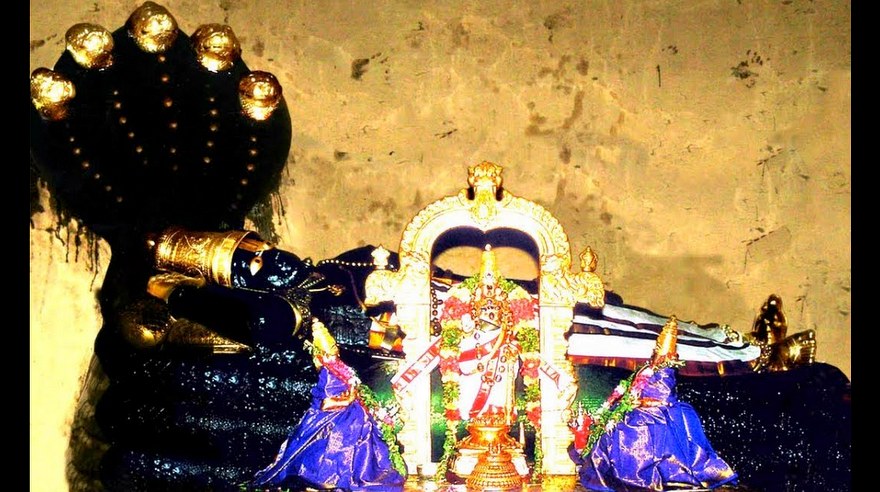 In a re-enactment of this 2700-year-old incident believed to have taken place in Tamil Nadu, Chilkur Balaji Temple head priest, CS Rangarajan carried Aditya Parasri, a young man from the Dalit community, on his shoulders and entered the temple complex adorned with floral decorations. 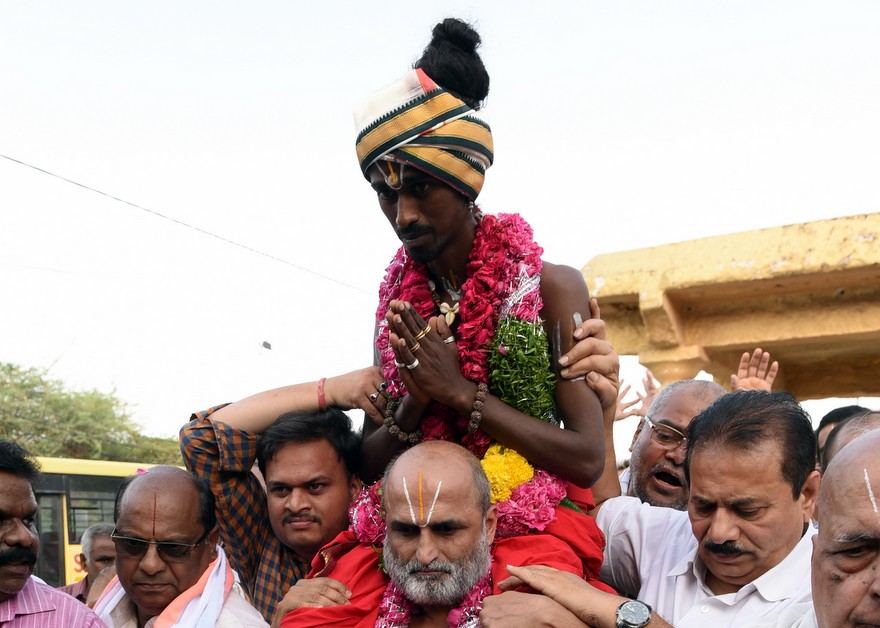 “Being a Dalit, my family faced a lot of hardships and discrimination. This sort of discrimination is not endorsed by any religion or Vedic scriptures or Upanishads. It is only there in the minds of the society and this mindset needs to change. From centuries, people have been dividing the Hindus without proper knowledge of the Vedas. In the early days, there was this perception that Dalit people were not clean and hence, were not allowed inside temples. If you are not clean, even a teacher in school won’t allow you inside the classroom. So the Dalits stayed away. But today things have changed and there are smartphones everywhere, so why this disharmony?” , said an emotional Aditya. 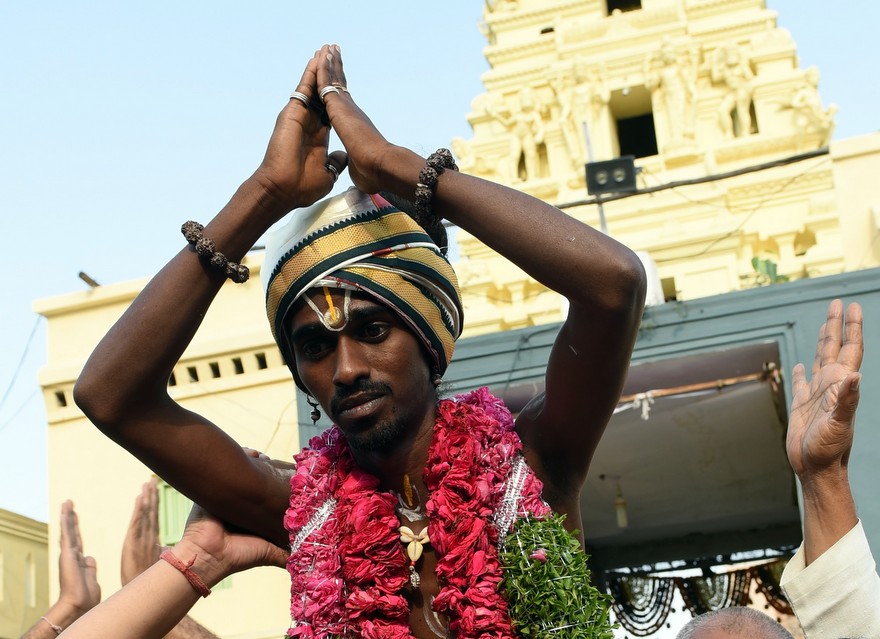 Aditya also expressed that Dalits themselves were equally guilty of causing disharmony within the community. “Instead of telling people to educate themselves and come up in life, our activists are constantly protesting. This will only disrupt unity and will not help anybody,” he added. 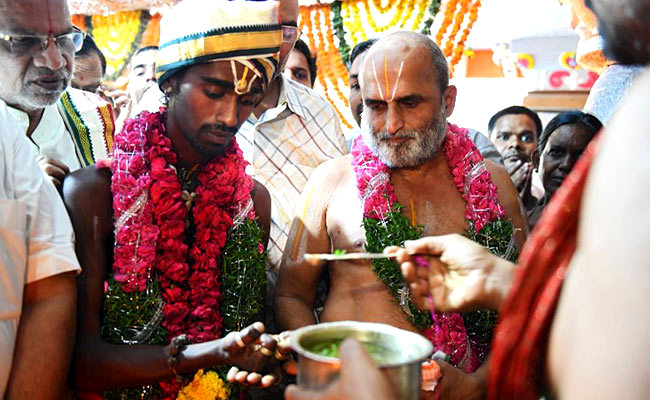 “The primary objective of this ritual, however, is to promote equality between all human beings. This ritual is also coinciding with the 1000th birth anniversary of Vaishavaite saint Ramanucharya, who always preached equality among everyone. So, we performed this activity like a festival,” the Chilkur Balaji priest, Rangarajan shared. 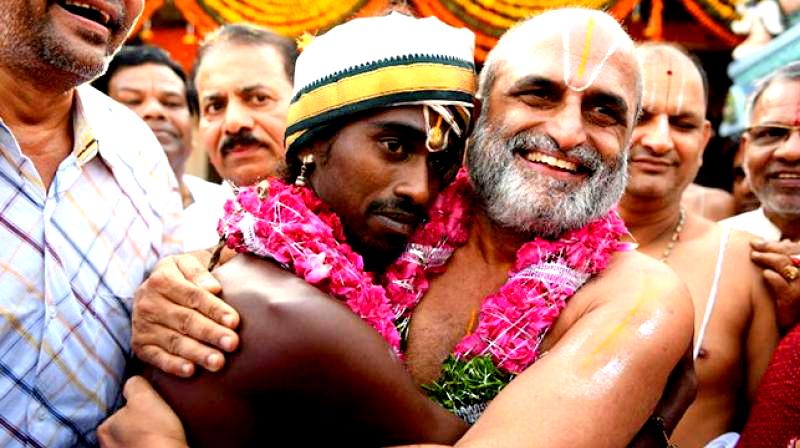 Similar ceremony happend in Nellore where, chief priest Kilambi Jagannadha Charyulu of the Sri Ranganadha Swamy temple carried a Dalit devotee Venkaiah Swamy of Nellore around the temple before taking him into the sanctum sanctorum for darshan. Mr Rangarajan said the prime objective of this gesture was to propagate equality. 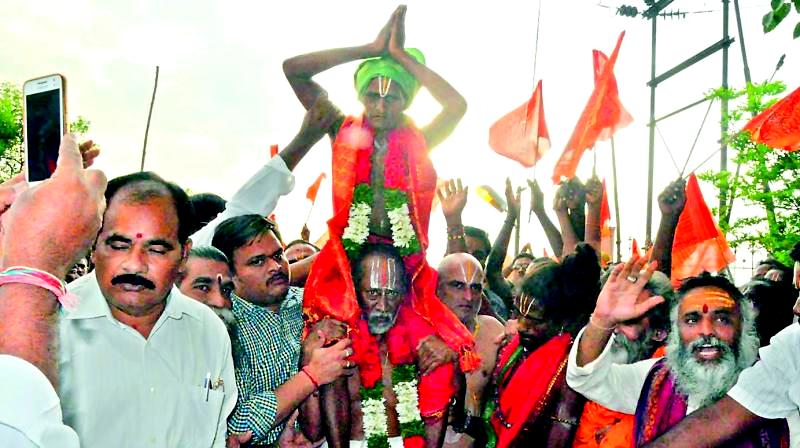 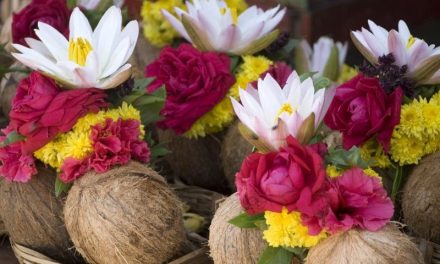 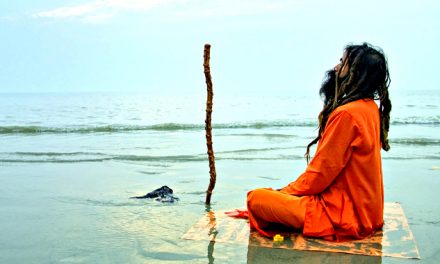 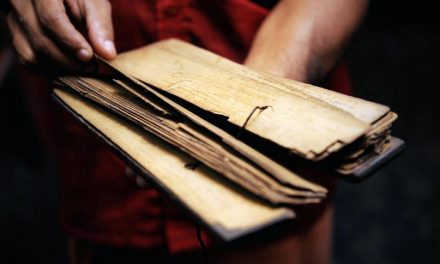