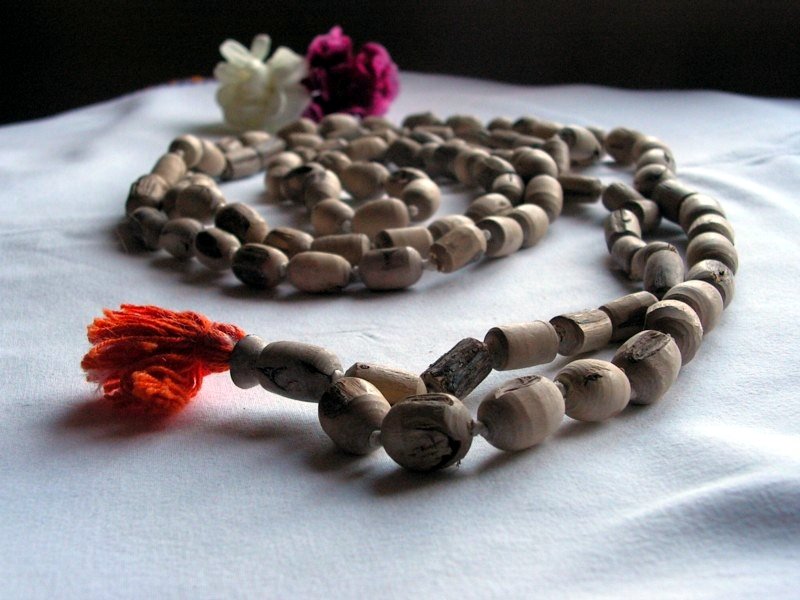 A rosary – a string of beads put together – to keep count of the number of times a person has repeated a mantra is an important prayer item in most Hindu homes. Commonly referred to as a mala, it typically has 108 beads. The source of beads could be rudraksh (seeds of the tree Elaeocarpus ganitrus), tulsi, vajyanti (the garden of Lord Vishnu), coloured glass, pearls or even precious or semi-precious gems. A rosary made of rudraksh is considered best. Rudraksh possesses germicidal and magnetic qualities.

Just as no religious ceremony is complete without kush, no charity is complete unless one gives it with one’s hand, praying without a rosary has no count and will bring no results.

In the Yogchudamani Upanishad it is said:

108 beads are stringed together to make a rosary because it is related to the frequency of our breath. In 24 hours, one breathes 21,600 times. 12 hours are spent in the daily routine. 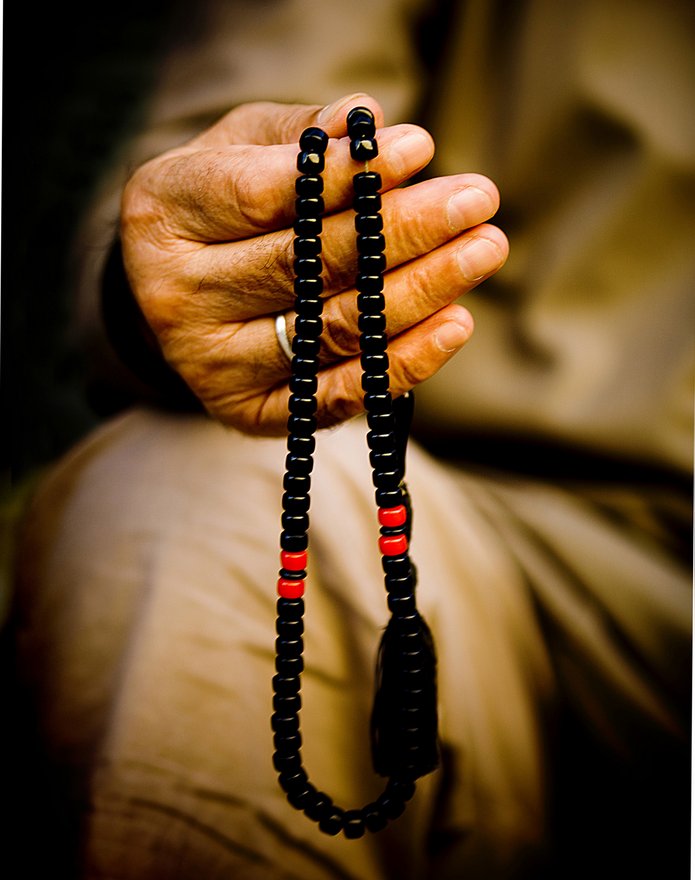 Another explanation pertains to the sun. In relation to the earth, in one year the movement between the sun and the earth is 216,000 degrees. Since for six months the northern part of the earth faces the sun, and for the other six months the southern part of the earth faces the sun, the number is reduced to half, that is, 108,000 degrees. When three zeroes are omitted, the remainder is 108. Each of the 108 beads in the rosary is symbolic of each degree of change. The third explanation is based upon astrology. The entire universe is divided into 12 segments. Each represents a sign of the zodiac. In Hindu religious texts, there are principally Navgrah (nine planets) that affect us. With 12 segments and 9 planets, when the two are multiplied we get the figure 108. Therefore, the number 108 represents the universe and controls our success.

As per another explanation, Hindu sages located 27 constellations, each of 27 stars. Since each constellation has four steps, 27 multiplied by 4 is 108. This number exudes purity. Hindus use the prefix Sri followed by 108 (i.e., Sri 108) with the name of a religious head or a teacher who has wide influence, or those who have contributed to promote the knowledge and understanding of Hindu religious texts. Since these religious leaders are referred to as Sant, Mahant, Mandaleshwar or Mahamandaleshwar, depending upon their stature, they are addressed as Sri 108 Mahant… (name).

What is the Best Way to Use the Rosary?

The use of a rosary enables one to keep count of the number of times a mantra or prayer has been repeated. Each rosary denotes 108 times. On the top of each rosary there is a bigger bead called Someru — a name derived from a mountain of the same name that allegorically represents being composed of gold and gems. This mountain is accorded a coveted position in the universe. The same coveted position is accorded to the Someru in a rosary. One begins using the rosary from the Someru, and when one reaches it again on completing one round of the rosary, crossing it is not recommended. Instead, one reverses the rosary and continues praying, moving one bead at a time. Irrespective of the number of times the rosary is rotated, one does not cross the Someru. Each time one reaches the Someru after completing one round of the rosary, one must think reverently of the god to whom prayers are being offered. At this point, the Someru is brought in contact with the forehead with the same reverence offered to God.

In the Shivpuran, Panchakshar Mantra, shloka 28, it is said that when using a rosary if one uses the thumb one achieves salvation. If one uses the forefinger it enables conquer of foes. When one uses the middle finger, prosperity is achieved. By using the ring finger one finds peace.

Why Do Many Hindus Wear a Rosary Around the Neck?

Besides being acknowledged as an important accessory in prayer, a rosary made of beads of rudraksh, tulsi and other divine gifts of nature is useful when worn around the neck or other parts of the body. During prayer, the use of the tongue, the vocal cords and the larynx are under greater stress than in normal everyday use. Their continued use can cause problems pertaining to the throat and the adjoining glands. Use of a rosary around the neck helps prevent the occurrence of these problems.

Rudraksh beads come in many forms. They could be anything from one to fourteen faced. Their effectiveness varies with quality. It is customary to use a 26-bead rosary around the head, one with 50 beads near the heart, and one with 16 beads around the arm. One with 12 beads can be used as a wristband. It is believed that wearing a 108-bead rosary around the neck ensures fulfilment and success. It has been equated with the ashwamedh yagya — a celebrated sacrifice performed only by an emperor. The Shivmahapuran, Padampuran and other religious texts say that the virtuous wear a 108-bead rosary and find a place in heaven. 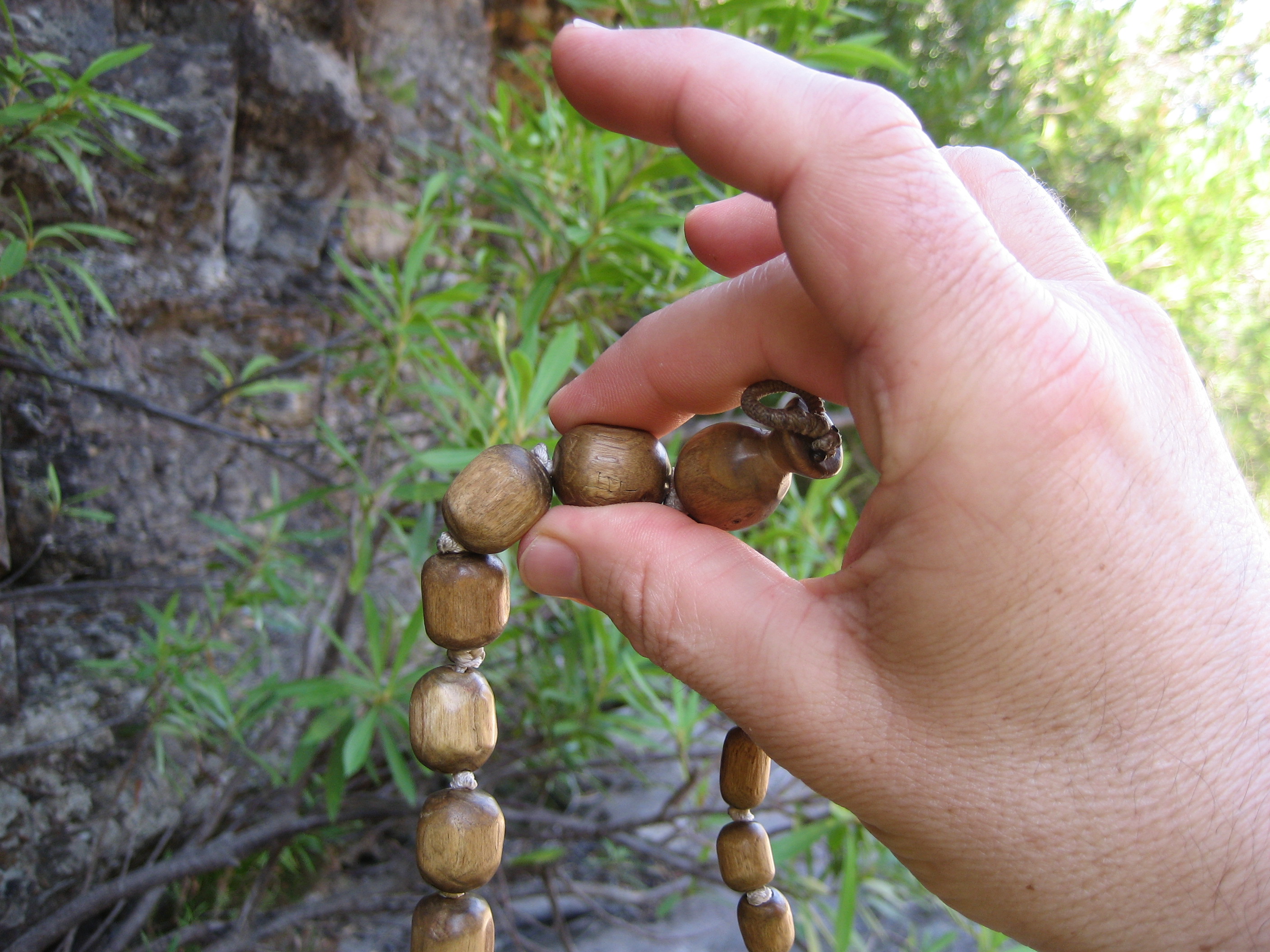 In the Shivpuran it is said:

A rosary made of no other item can be as blessed and fruitful as that of rudraksh.

In the Shrimad Devi Bhagavata it is said:

Nothing could be nobler than wearing rudraksh on one’s body.

In shlokas 65 to 66, describing the qualities of a 108-bead rudraksh rosary, it is mentioned :hat benefits of the ashwamedh yagya accrue every moment to one who adorns the rosary around his neck and one finds a place in heaven. This benefits 21 generations.

One should wear a rudraksh rosary with devotion as directed in religious texts. This helps one grow spiritually, become free of worldly obstacles and problems, benefits the mind and heart, keeps blood pressure within control, banishes imaginary fears, ensures mental peace, calms and balances the flow of bile, and protects the wearer from sudden death. Whoever uses it to pray benefits ten-fold.

Hindu scriptures accord great religious importance to tulsi. It protects against disease, promotes longevity and has special magnetic qualities. Using it imparts its qualities to the person who wears it around his neck. One develops greater confidence and a magnetic personality. Fame and popularity grow and one feels blessed and content.

When wearing a tulsi rosary around the neck, contact with the skin helps prevent cough and cold, headache, skin disease and blood disorders.

In the Shaligrama Purana, it is said:

Wearing a tulsi rosary is very beneficial during mealtimes. A bath with tulsi rosary around the neck is equivalent to a bath in the holy Ganga and other holy rivers and streams.

While Praying, I Find it Hard to Concentrate Upon God. What can I do?

Just as a child does not start running soon after birth, do not expect to be able to concentrate for long periods in prayer. You will learn concentration gradually. Many begin by participating in group prayers. In reality, God has no form. He is present in all things at all times. Until you reach the stage where you can perceive God everywhere, concentrate on whatever you find convenient. Concentrate on one who is kind and benevolent to you. To you he is God. Do it for whatever time that suits you. Your concentration will improve as you begin to enjoy these short experiences.