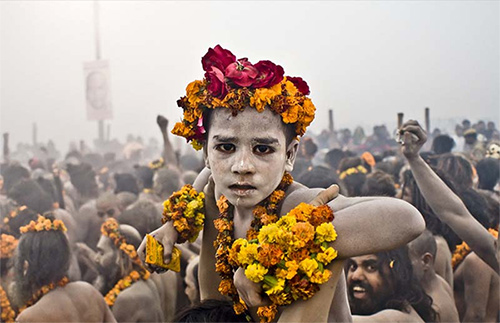 Ganga Sagara Mela celebrates the holy union of the River Ganges with the Bay of Bengal. The festival is celebrated to honor the occasion of King Bhagiratha bringing down the River Ganges from the heavens above to join with the oceanic waters of planet earth. This festival of confluence is celebrated on the sacred day of Maha Sankranti. This is when the sun starts moving away from the Tropic of Capricorn towards the northern hemisphere.

Over six lakh devotees from far and wide visit the holy confluence point on this day. They dip in the waters by the island of Sagara, off the eastern coast of Bengal. The island is by the confluence of the two water bodies. It is here that one can find the ashram of Kapila Deva, who was an incarnation of Lord Krishna. Devotees offer their prayers to the River Ganges and sing hymns by the waters. There is a huge fair with pujas, stalls, music and renditions of bhajans and keertans, during the time of festivities.

There is a unique legend that is related to this festival. The famous King Sagara of Ikshvaku dynasty, of the kingdom of Ayodhya had two wives Queen Keshani and Queen Sumati. The king did severe penance and asked for children as neither wife could bear him a child. Upon the fulfillment of the penance, Queen Keshani birthed a son called Asmajas and Queen Sumati gave birth to sixty thousand sons. The king was beyond happy. As years passed his kingdom grew by leaps and bounds. He wanted to perform the Asvamedha Yagna to consolidate his sovereignty. According to the rituals he led the sacrificial horse free to gallop through the adjacent territories. When the other royals saw the horse, they realized that they has but one of two options. They had to either accept King Sagara’s supremacy or capture the horse. This meant battling the king’s sixty thousand courageous and resilient sons, who were following the horse. So they just let it go. Finally the horse wandered into the ashram of the sage Kapila, the son of Dehabuti and an incarnation of Lord Krishna. The sons of King Sagara thought they captured the horse and troubled the sage. Since, they broke his meditation, he got extremely angry. He placed a curse on them and reduced them to ashes.

Many years passed. King Sagar’s great grandson called King Bhagiratha, who was a great bhakt of Lord Vishnu, of whom Sri Krishna was a manifestation. He offered prays to the Supreme Preserver for the liberation of the souls of his ancestors. He requested for the heavenly waters of the River Ganges to wash the remnants of his ancestors and thus them to pass over. The River Ganga was flowing in the heaven but Lord Vishnu was impressed by the austere penance offered by King Bhagiratha and decided to grant his wish. It is said that River Ganga gushed into the ocean on the Maha Sankranti day to cleanse the remains of the sixty thousand sons of King Sagara, in whose memory the island was consecrated. The story is further linked to another event.

The sages and hermits who prayed by the ocean shore were deeply harassed by evil asuras, especially during night time. They did not permit the sages to perform their ascetic duties and continually harassed them. Every night they would emerge from the ocean bed and wreak havoc. The sages had a meeting to decide how to handle this grave problem. They were even fearful for their lives. They then took a common call to appeal to the great Rishi Agastya for some help. Upon hearing the request Rishi Agastya drank up the entire content of the ocean. This brought some momentary solution as all the demons were exposed but the after effects were very drastic. Although this was done with a good intention, the consequences were perilous. The land became dry and parched. All the water needed for the sustenance of life on the planet disappeared. This was fatal for all life forms – plants, creatures, beasts and mankind. But King Bhagiratha’s prayers to Lord Vishnu brought the Ganga River to earth. As Ganga Ma flowed into the ocean, it filled up instantly. Both the Agni and the Padma Puranas state that the Ganga River descended on planet earth on the day of Dussehra (the tenth day of Jayeshtha). This why on this day one must pay the river a visit and absorb the goodness of her magical waters. Hence, it is also called Ganga Dussehra by some devotees.

Like most river based festivals, Ganga Sagara Mela too is a bathing festival. The River Ganaga is said to be a mother goddess, especially by the people of Bengal, UP and Bihar, through which the river meanders. The devotees who dip in the Ganga on this auspicious day are liberated and free of all sins. They can also carry Ganga-jal to their houses to purify home and hearth. Even the dead benefit from the river. Just like King Bhagiratha’s ancestors, if one immerses the ashes after cremation in to the River Ganges then one can attain moksha (freedom from the cycle of birth and death) in the afterlife. There are seven established practices to worship the river Ganges. These include: by calling out her name –Oh Ganga, by doing a Ganga darshan, by praying and bathing in her waters, by touching Ganga jaal, by standing by the banks of the river and offering prayers and by carrying the clay dug from the mystical river. The river also has a personified anthropomorphic form. She is depicted as a graceful woman standing atop a wild crocodile, while holding a vessel of water. Along with the imagery of the radiant Goddess Yamuna, the sacred river deity is often engraved on doors of temples and palaces.

Hence, the Ganga Sagara Mela holds an immense value and reverence in Indian religion and culture. 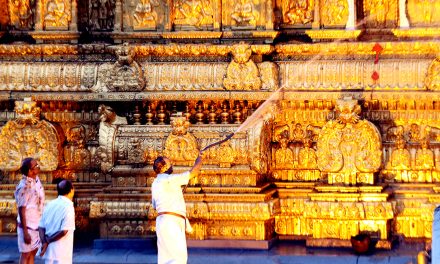 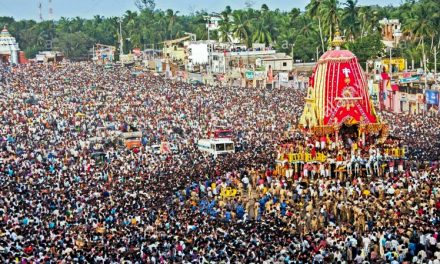