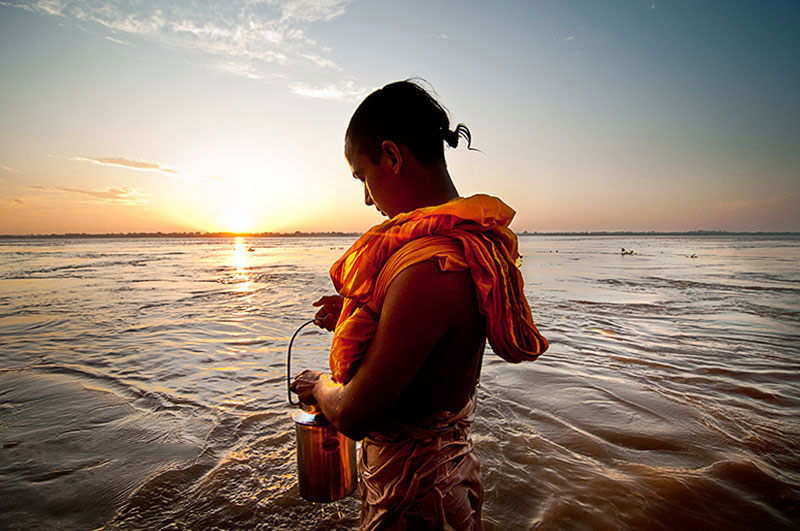 Water purifies the body and the mind. It rejuvenates the spirit. It liberates the psyche. The waters of the Ganga River can even erase karma from the past and give moksha, or cessation from the cycle of birth and death. From ancient times, Vedic texts have extolled the religious, therapeutic, and spiritual powers of water.

Most religious texts recommend an early bath around 4 o’clock a.m., which is considered the Brahma muhoratham or most auspicious time of day. The Vedas recommend that bachelors should have a bath once a day, married people twice a day, and saints three times a day.

The Garuda Purana extols the virtues of snanam in the following manner:

Water nourishes and sustains the spirit as well as the body. Water is high among the elements, as it purifies and uplifts the individual from the mundane to the transcendental. Mountain water, spring water, and rainwater collected are highly beneficial and considered noble by the wise.

Taking a bath in spring water, rainwater or river water can bring benefits to both body and mind. These benefits can be further multiplied if you were to chant a Sanskrit mantra called the Snaman Mantra before taking bath. Since the Snanam Mmantra has to do with water, by taking water in your right palm and performing acaman while reciting the following verse, your mind could be lifted from the mundane into the sublime:

After reciting the mantra you could sprinkle some water in different directions to purify the place. 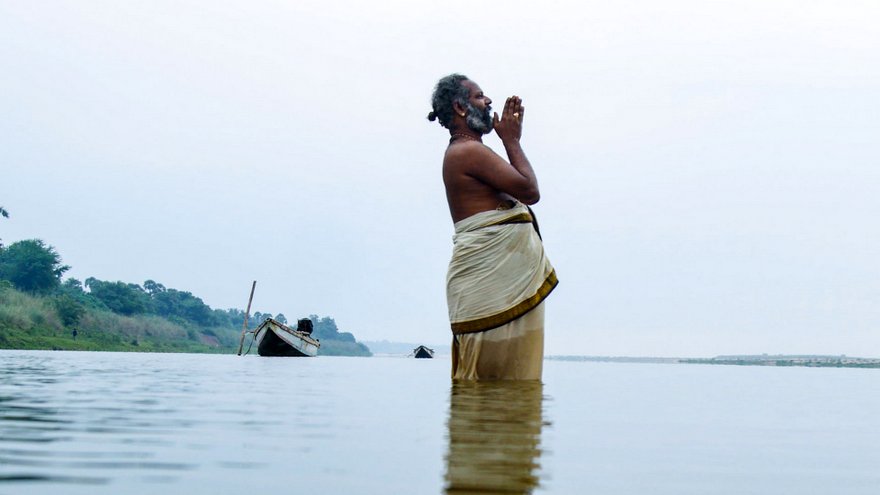 Hindi Translation of the Snanam Mantra:

In Hindi, the mantra can be understood in the following manner:

For those who do not understand Hindi, an English translation follows. 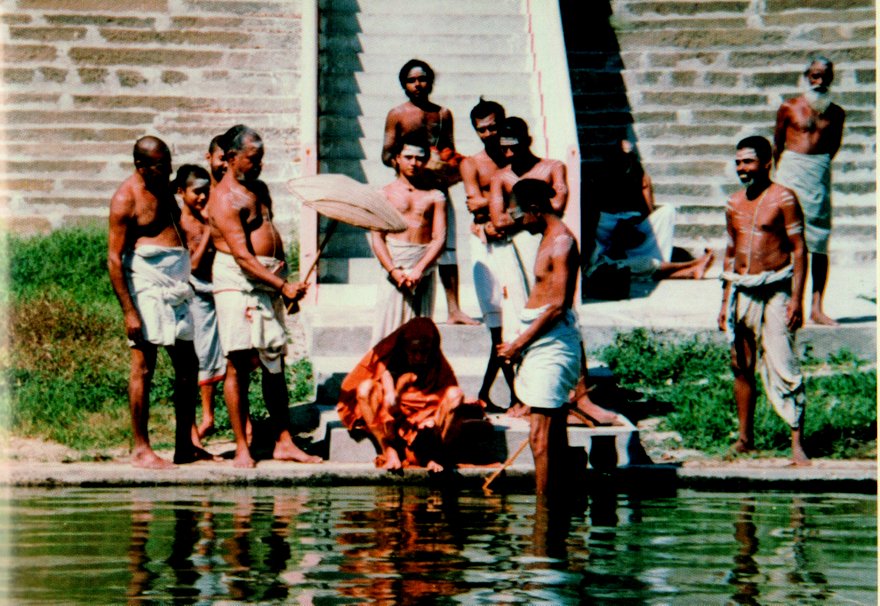 The English Translation of the Snanam Mantra:

“Whether a person is pure (pavitra) or impure (apvitra) that is, a person might be in any situation or condition, he can still realize his goal. Gatopiva means any kind of person. Vadi pundareekaaksha means the lotus-eyed Vishnu (pundareek plus aksh= kamal plus nayan which means Lord Vishnu). If one recites the name of the lotus-eyed Vishnu then he will from both inside and outside (baahya plus aabhyantar) become pavitra or pure (shuchi). Panditji or the Hindu priest places Ganga jal or Ganga water on the palm of a person’s hand and asks him to drink it and then recite the snanam mantra. In this manner (iti), on one’s own accord (aatmaanum), one could purify oneself, or wipe oneself or purify oneself (prokshya) while taking the name of Shree Vishnu.”

In the Hindu tradition there are two kinds of bathing-the bathing of the body and the bathing of the mind. The first begins with Om apo-hish-ta may-o-bhuva and ends with Om-apo-jana-yatha cha-na. This is then followed by sprinkling water on the head, chest and feet.

The notions of pollution and purification are quite important in daily life, social gatherings and festivals. The Indian festival Deepawali, for instance, is associated with fire which destroys evil, but the daily ritual of snanam also removes iniquity and malevolence. Both fire and water are seen as cleansing agents, literally and symbolically.

Deepawali commemorates the victory of Lord Ram over Ravana. Some also see it as a victory of Lord Krishna over the demon Narakasura. Deepavali symbolizes the victory of light over darkness-Thamasoma Jyothirgamaya, or from darkness to light. Deepawali falls on a new moon or amaavasya in the aasweyuja month of the Hindu (Lunar) calendar. On Naraka Chaturdasi, the day before Deepawali, Lord Krishna took a bath to cleanse the blood and grime from his battle with Narakasura. Hence, it is customary to take an oil bath (nalugu pindi snanam) before sunrise.

Purifying life through snanam is not just for divine beings. Ordinary beings too can clean themselves with a bath. During the Kumbh Mela at Prayag Raj (Allahabad), millions of devotees from all parts of India take a dip in the holy Ganga River, believing that this act will bring them untold merit. Some say that on festival days, the water of the Ganga River transforms itself into nectar and anyone who bathes in it will erase all his sins.

Recently biologists are talking about the contamination of river water from industrial effluents and the unhygienic condition of such waters, but this has not undermined the belief of people in the transcendental properties of Ganga jal.

Most physical exercises in India require a bath before their commencement. Yoga recommends that before doing the Hatha Yoga[2] or Pranayam[3] it is important to take a bath. A ritual cleansing begins with washing the head and then moving down to the feet. Through snanam we not only control the body, but also purify the mind. Water functions both as a physical phenomenon and a symbol ritual. 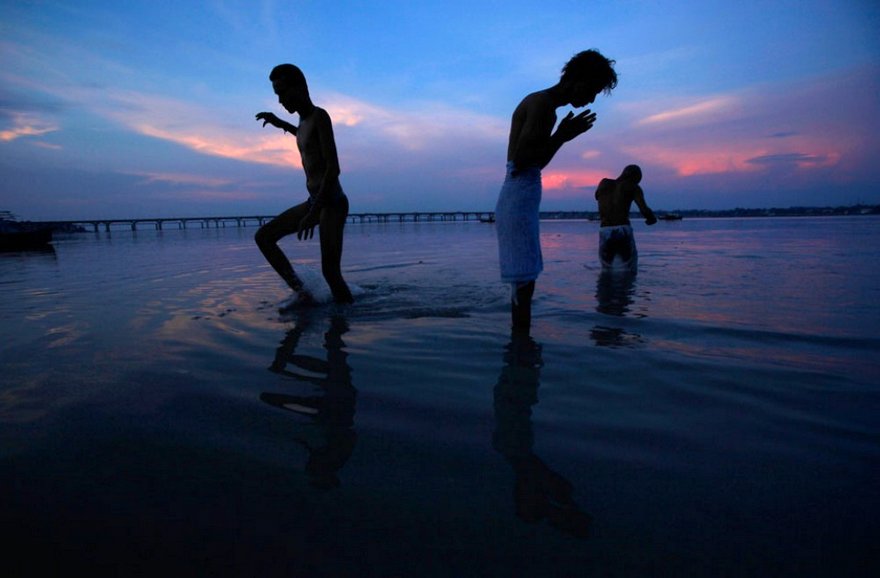 Not only in the Hindu but also in the Buddhist tradition, bathing has great significance. Rules for using public bathing facilities were clearly laid down for bhikkus or Buddhist students. The bhikkus were not allowed to sport in water, nor allowed to rub their bodies against wood or against each other. They were allowed to shampoo their hair, but not to use wooden objects or string of beads to rub their bodies while taking a bath. If a bhikku suffered from skin scabs he was permitted the use of a mallaka or back scratcher made of slit crocodile teeth.

In the Hindu tradition water stands for rejuvenation, prosperity and the male-female principle. Lord Vishnu is the Lord of the water and his consort Lakshmi the mistress of prosperity. Therefore bathing in a river can activate the forces of Lakshmi and Narayana in one’s life. When we recite the mantra ‘Eh-vang’ we exhort the water of the river to carry our spirit to Vishnu, the source of rejuvenation.

Most parts of India are hot and dusty. Bathing becomes an important activity to remove the grime and dirt from the body. Therefore many ancient Indian texts highlight the therapeutic and symbolic significance of snanam. Over the centuries the notion of snanam has entered daily life, social gatherings and festivals of most Indian communities. Some devotees prepare themselves for twelve years to go to Allahabad and have a bath in the Ganga River, called kamya snanam, while others are satisfied with an ordinary bath, or nitya snanam. There are others who have a bath in rain when the sun is shining; this is called the dhivya snanam. There are so many different kinds of snanam, each bringing its own benefits. Today snanam has become the sine qua non of good health, serenity and hygiene.

The Ancient Tradition of Theyyam Dance Worship in Kerala